Historical Background
Darius sent an army to punish Greece for rebellion, and the Athenians sent a force to face the Persians near Marathon. For eight days the armies stared at each other and nothing happened. On the ninth day (either 12 September or possibly 12 August 490 BC reckoned in the proleptic Julian calendar) it became known to the Athenians that Eretria had fallen by treachery. This meant that Artaphernes was now free to move, and might attack Athens. The Athenian army went out to face the Persians. This was probably a combined decision by the generals, although Herodotus reports that they were rotating days of command and that Miltiades was in charge at this point, since he had a large part in persuading the others to do so. According to Herodotus, five Strategoi voted for the move and five voted against it, with Callimachus, the Polemarch, casting the deciding vote in favor of attack. Since the bulk of Persian infantry carried bows, the Greek plan was to advance in formation until they reached the limit of the archer's effectiveness, the "beaten zone," or roughly 200 yards, then advance in double time to close ranks quickly and bring their heavy infantry into play. This meant that they would almost certainly end up fighting in disordered ranks, but this was preferable to giving the Persian archers more time. The Greek center was reduced to possibly four ranks, from the normal eight, in order to extend the line and prevent the Persian line from overlapping the Greeks. The wings maintained their eight ranks. The Greek heavy infantryman, or hoplite, was much more heavily armored than the Persian troops and the pike the Greeks carried gave them greater range than the short spears and swords of the Persian foot soldier. The Persian advantage came from the bow that most of them carried (the advantage was partially cancelled by the superiority of Greek armor). As the Greeks advanced, their wings drew ahead of the center, which was under heavy fire from the archers. As they closed some Persians broke through the resulting gaps and drove the center back in rout. The Greek retreat in the center, besides pulling the Persians in, also brought the Greek wings inwards, shortening the Greek line. The inadvertent result was a double envelopment, and the battle ended when the whole Persian army, crowded into confusion, broke back in panic towards their ships and were pursued by the Greeks. Herodotus records that 6,400 Persians died for the loss of approximately 192 Athenians. As soon as Datis had put to sea, the Athenians marched to Athens. They arrived in time to prevent Artaphernes from securing a landing. Seeing his opportunity lost, Artaphernes set about and returned to Asia. The Spartans arrived afterwards, toured the battlefield at Marathon, and agreed that the Athenians had won a great victory. The Greek upset of the Persians, who had not been defeated on land for many decades, caused great problems for the Persians. Seeing that the Persians were not invincible, many people subject to their rule rose up following the defeat of their overlords at Marathon and order was not restored for several years. The common enemy of Persia helped provide some solidarity to the disunited Greek city-states. The victory helped solidify the view that Greeks were "civilized" and Asians were merely "Barbarians."
Notes:
The Persian force was largely conscript, hence they have only 4 cards. The Greek force in comparison was fighting for its homeland and brilliantly led. The Greeks start close to the Persian force to simulate their famous advance at the double to minimise losses through missile fire. This meant they hit the Persians with somewhat disordered ranks, hence their three commands are staggered and widely split. Why are there cavalry units in this scenario? A story tells that Ionian deserters brought news to the Greeks that the Persian cavalry were away, whichmade up their mind to attack. The Persians in the scenario have a minimum of cavalry; most had been embarked, and most of the rest were away being watered, but many sources mention some cavalry at the battle. Another story tells that Pheidippides ran from Marathon to Sparta to request help, ran back to Marathon with the news that the Spartans would not come until after their religious festival was over, ran back to Marathon and battled the Persians, then ran to Athens to tell of the wonderful victory, then fell dead of exhaustion. Other sources suggest he ran from Athens to Sparta and back in three days. Either way, a remarkable achievement!
The stage is set. The battle lines are drawn and you are in command. The rest is history. 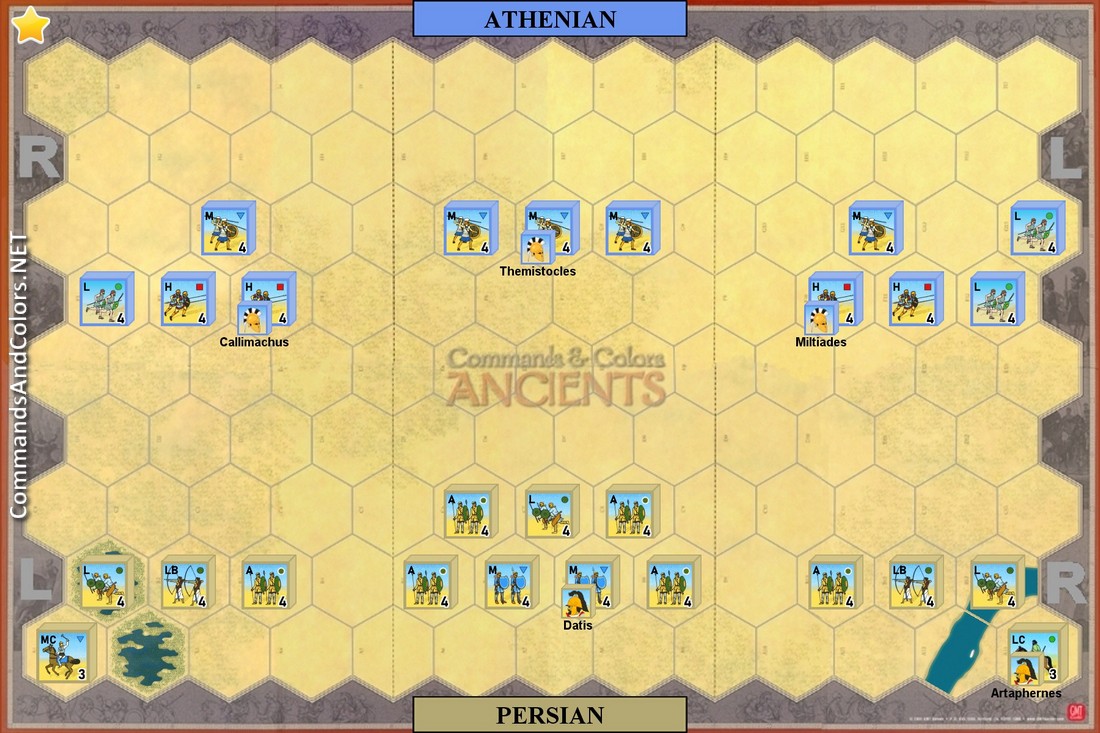 Special Rules
The marsh hexes play as forest, except they do not block line of sight.

The river is fordable along its length.