Historical Background
Pharaoh Ramesses II and the Hittite king met at Kadesh on the banks of the river Orontes in northern Syria around 1275B.C. This battle marked a stalemate between Hittite power and the power of 19th Dynasty Egypt, where the two met face to face along their outermost marches, in what is now Syria. The Hittites, based at Carchemish, were angry over the defection of Amurru to Egypt and wanted to bring it back under control – on the other hand the Egyptians wanted to protect their new vassal. The Hittite king Muwatallis, who had mustered several of his allies (among them Rimisharrinaa, the king of Aleppo), had positioned his troops behind the hill at Kadesh, but Ramesses thought they were at Aleppo and learned the truth only after capturing two Hittites. Immediately Ramesses sent messengers to hasten the coming of the Ptah and Set divisions of his army which were still on the far side of the river Orontes. Before Ramesses could gather them all together, however, 2500 of Muwatallis' chariots attacked the Ra and Amon divisions and plundered the Egyptian camp. The Egyptians retreated, and Ramesses himself narrowly escaped capture, mainly thanks to the intervention of a troop contingent from Amurru (Ne’arin means ‘young men’), which suddenly arrived to assist the pharaoh and drive the Hittites back. The Egyptians regrouped and almost surrounded the Hittites, but the Hittite chariots retreated back across the Orontes to join their infantry. It is a mystery why Muwatallis did not support his chariots with his infantry.
The stage is set. The battle lines are drawn and you are in command. The rest is history. 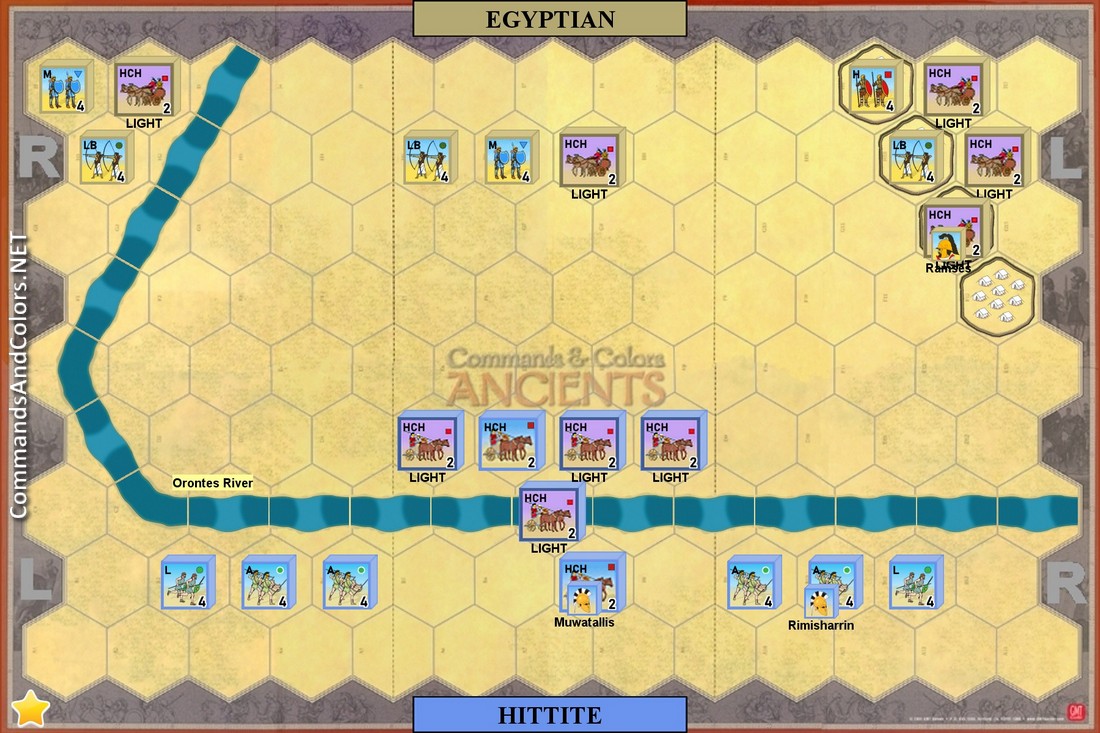 Special Rules
The River Orontes is fordable along its entire length.

Kadesh may not be entered.

The Ne’arin light chariot units must stop movement for the turn on entering a fortified camp hex. They may battle and take ground as normal.

Each fortified camp hex occupied by a Hittite unit counts as 1 victory banner for the Hittites. The unit must remain on the hex to continue to count the banner.

You may have to use light cavalry blocks to represent light chariots.