Historical Background
After their defeat at Leuce, Rome sent Marcus Perperna to Pergamon with a fresh army to replace the deceased Crassus. Aristonicus, probably now aware that he faced a full strength Roman army, retreated to the town of Stratonicea in northern Lydia. Perperna tracked his man down and caught Aristonicus by surprise and defeated him. Aristonicus took refuge with the remains of his army in the town, but was eventually forced to surrender as Perperna took the town. Aristonicus was shipped off to Rome for Perperna's triumph, but Perperna died in Pergamon before he could return and Aristonicus was then killed.
I have assumed that Rome has given Perperna a proper army after the debacle at Leuce where the many different contingents could only have caused confusion. This would explain why Aristonicus was eager to fight Crassus but not Perperna. The ancient sources suggest that Perperna caught Aristonicus by surprise at Stratonicea, and I have therefore deployed the Pergamene army in a disordered array as they try to form up for battle compared to the neat line they had at Leuce.
The stage is set. The battle lines are drawn and you are in command. Can you change history? 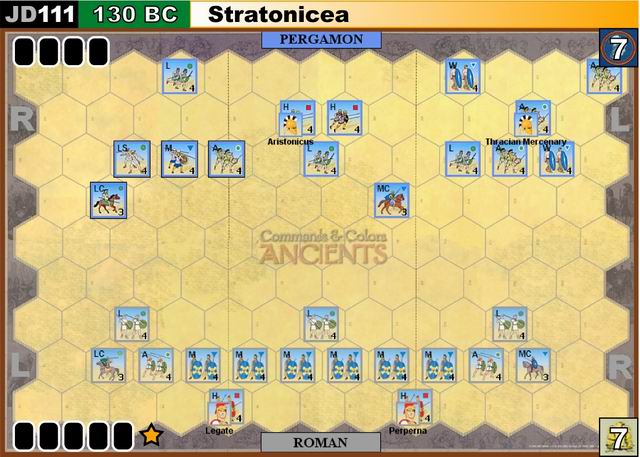