Historical Background
In 133BC Attalus III of Pergamon died and left his kingdom to Rome. Aristonicus claimed he was an illegitmate brother of Attalus and arrived from Thrace to claim the throne. Rome showed little initial interest in disputing the claim, so that Aristonicus, who re-named himself Eumenes III, was reasonably successful in capturing many local cities, although he was unble to take the actual city of Pergamon. The usual interpretation of the sources has Aristonicus as a champion of the people who promised to free slaves and improve the lot of the poor, but other interpretations suggest that he may also have had the support of other classes of society who had no interest in seeing the arrival of the Romans. One of the main groups of this category were the former Macedonian settlers of the interior. The army of Aristonicus, as well as the slaves, poor and Macedonians probably also contained Thracian mercenaries, who had presumably accompanied him initally, and also the usually available Greek mercenaries. Aristonicus produced his own coinage and so was certainly able to pay them.
As the uprising spread and nearby kingdoms began to complain to Rome, the Romans finally responded by sending the consul Publius Licinius Crassus with a Roman force to deal with the situation. Crassus was aided by troops from Bithynia, Cappadochia, Pontus and elsewhere, but when his polyglot army met Aristonicus near the town of Leucae, he was defeated and killed. Rome then sent Marcus Perpena, who defeated and captured Aristonicus during a surprise attack. Aristonicus was shipped back to Rome and executed.
The stage is set. The battle lines are drawn and you are in command. Can you change history? 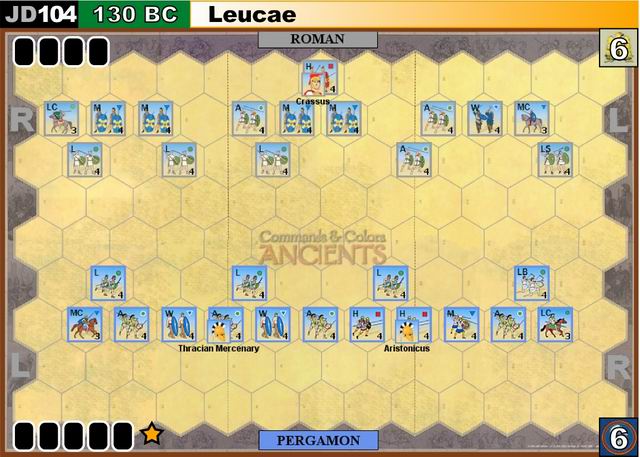 LEUCAE– 130BC
The army of Aristonicus is a translation of my thoughts in the historical background. The medium cavalry, and warrior/Aux infantry on the left are the Thracians. The Heavy infantry in the centre are the Macedonian settlers and the troops on the right are the Greek mercenaries. The light infantry are the slaves and poor classes. The Roman army, by the same method, is a legion of Romans in the centre, Bithynian and Pontic troops on their right, and Cappadochian, Galatian and eastern slingers on their left.