Historical Background
The Battle  of Campi Catalaunii took place on June 20th,  451 AD between a coalition of Roman, Visigothic, and allied forces attempting to repulse invading Huns commanded by Attila. It was one of the last major field operations conducted by the Roman West. The battle resulted in a Hunninc defeat.

Impending Darkness
This battle commences shortly before darkness. Prior to his turn on the 6th turn, the player that moved first must roll a die/dice each turn to see if darkness has overtaken the battle. The 6th turn, the first player rolls 1 dice. Any "Green" result ends the battle. If the game concludes due to darkness, the side with more banners wins. The first player wins ties if the banner count is even. On the 8th turn, two dice are roll. Each turn one more dice is rolled. After the 10th turn, the battle automatically ceases.

Fierce Leader (Attila)
Attached units battle back with an additional dice. If attached to LC, LI, LB, or LBC the first sword rolled in Close Combat inflicts losses in addition to the battle back bonus.. Lose of a fierce leader counts as 2 banners  even if he evades off the field of battle.
The stage is set. The battle lines are drawn and you are in command. Can you change history? 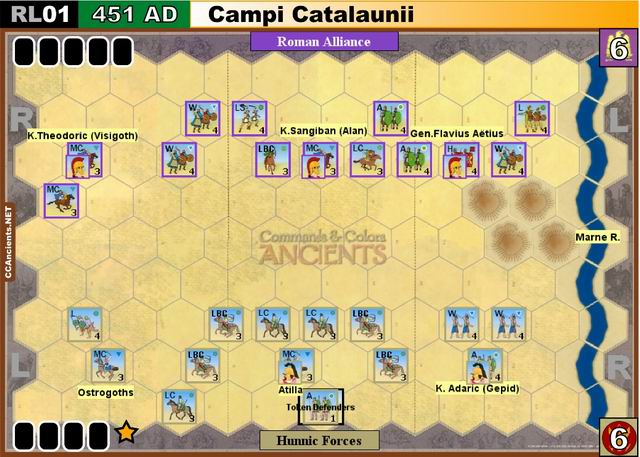 Token Defenders: 1 block of Aux. Only have 1 dice for CC. 1 dice for ranged combat (2 hexes). May not leave initial hex. Do not count as a banner if defeated. May attack enemies adjacent to the defended hex if activated. Do not block retreat of allied units. Allied units remove the Token Defenders if they move into the same hex. They replace them. They may opt to replace them or be compelled to retreat/evade into the hex.