Historical Background
"A Greek fleet under the command of the Spartan Cleonimus ... after rounding the Cape of Brindisi and were pushed by winds in the middle of the Adriatic ... advanced to the shores inhabited by the Venetians. ... So Cleonimus ordered to transfer the fleet in the area upriver [Brenta]. Since the river bed did not allow the passage of ships heavier the mass of the gunmen moved on boats lighter and came in a very populated area, where they were allocated three tribes shipping Padua. After leaving a small garrison to ships, stormed the villages, burned houses, took away people and animals, more and more away from ships in the prospect of further booty. "
Livy X, 2
The stage is set. The battle lines are drawn and you are in command. Can you change history? 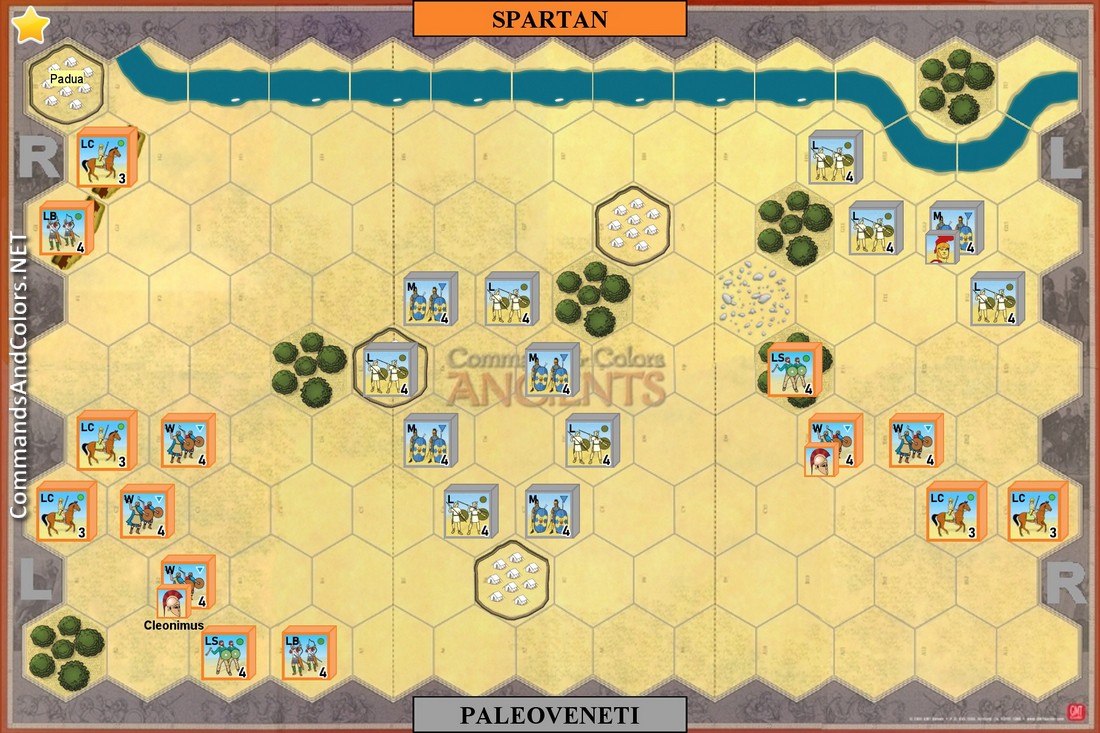 "When the news arrived in Padua what was happening to the people divided their forces into two contingents. The first led to the area in which they were reported, the enemy vessels, the other, following a different route to avoid meeting his opponents, went instead to the point where they were anchored ships, fourteen miles from the city. Elimination of the men on guard with a surprise attack, flooded ships .... Even the battle on the mainland against the perpetrators of the looting was successful. And while the Greeks sought refuge in the direction of the vessels, were discussed on the other contingent of the Venetians, who were surrounded and massacred. Some prisoners revealed that the king Cleonimo fleet was three miles away. So, after leaving the prisoners in a nearby village because they had watched [Rain Sacco, Campagna Lupia or Arzergrande?], The Padua, embarking on boats from the river on purpose built with a flat bottom to handle the shallow waters of lagoons and Instead, the focus on vessels stolen from the Greeks, reached the enemy fleet, surrounding buildings remained vessels ... And while the Greeks fled toward the sea without even trying to resist, the Padua gave chase to the mouth of the river, and after having torn them and burned some of the ships ended in great confusion on the sandbanks, returned winners. Cleonimo he left with only one fifth of the fleet intact ... In Padua were hung the beaks of ships and the remains spartan in the old sanctuary of Hera to commemorate the battle river ... "

Although the reconstruction may be biased and not completely reliable because the details written centuries after the events, however, the historic Padua recalls a significant episode of uninterrupted attendance Greek Adriatic. Attendance is not always peaceful! The Spartans not only penetrated precariously Padua inland villages to loot the crops but it certainly attracted by the wealth of some sanctuary Paleovenetian. The raid was aimed at perhaps the largest sanctuary of the god Aponos (at Abano Terme) or the recently identified along the Brenta Campagna Lupia. Intentions of looting averted by the prompt reaction of Veneticans!