The Battle for Albania 65 BC

From Pompey’s Campaigns in the Caucasus

The Albanians were one of the 14 peoples of the East that Pompey claimed to have defeated at his grand triumph in Rome in 61 BC. Pompey (from 67 BC onwards) also closed down the pirates of the Mediterranean, finished out the 3rd Mithridatic War with King Mithridates and his royal relations in Armenia, then campaigned against the Iberians, Albanians, and various other tribes of the Caucasus area, saw to the political settlement of Syria and other kingdoms of the East, besieged Jerusalem and invaded the Jewish temple, and finally (circa 63 BC) conducted a punitive expedition against the Nabataeans in a desert region which is today part of the Kingdom of Jordan.

Historical Background
“Oroeses (the Albanian king) had mustered a sizeable army, numbering some 60,000 foot and 22,000 horse according to Strabo, although Plutarch gives the number of cavalry as 12,000. Roman numbers are not stated in our sources, but may well have been substantially less than the 40-50,000 Pompey had mustered against Mithridates in the previous year. Many troops were needed to act as garrisons or to mop up the last fragments of resistance in the recently conquered territory, whilst the problems of supplying men and animals in the often difficult terrain anyway discouraged the use of too large a force. Pompey may have had a force half the size of the one he led in 66 BC and could well have been heavily outnumbered by the Albanians. The latter certainly had an advantage in cavalry, some of whom were heavily armored cataphracts, and Pompey needed to find some way of dealing with these as the king, obviously intent on forcing a pitched battle, advanced to meet him.”

“Throwing out his own horsemen as a screen, he (Pompey) advanced down on to a level plain flanked by hills. Some of his legionaries were concealed in defiles on this high ground, the men covering their bronze helmets with cloth to prevent the sun from reflecting on the metal and giving away their position. Other cohorts of legionaries knelt down behind the cavalry, so that they could not be seen from the front. Oroeses advanced against what seemed to be no more than a line of horsemen. Pompey repeated another tactic he had used against Mithridates, ordering his cavalry to attack boldly and then, feigning panic, to withdraw. The Albanian cavalry pursued them eagerly…and as they did so lost much of their order. The Roman auxiliary horsemen retired through the gaps between the infantry cohorts, which then stood up. Suddenly the Albanians were faced with a fresh and well-formed line of infantry who came forward against them, yelling their battle cry. Behind the legionaries the Roman Cavalry rallied and moved round behind the line to attack the enemy flanks, whilst more cohorts emerged from the concealing defiles to threaten the enemy rear. The position of the Albanian army was hopeless, but in spite of this the warriors appear to have fought very hard. One account claims that Pompey fought hand to hand with the king’s brother and killed him in the best traditions of Alexander the Great or Marcellus. Although a hard fight, the battle proved decisive, for Oroeses soon accepted the peace terms imposed on him.”

(The above selection is from In the Name of Rome: The Men Who Won the Roman Empire by Adrian Goldsworthy pages 197-198) 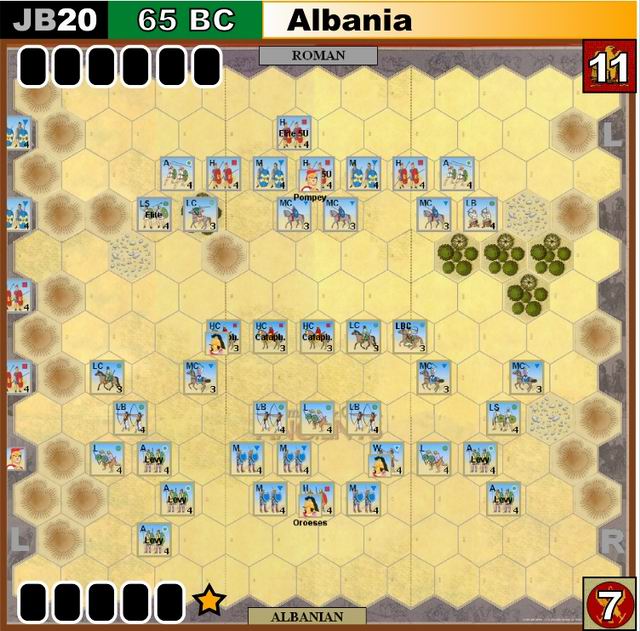 Special Rules
Command Rules:
All Albanian & Roman Leaders may cancel a retreat or a sword hit if present with the unit. Units on both sides involved in close combat with the support of a Leader may only count one helmet hit amongst those rolled to inflict a hit on an opposing unit, unless Pompey is the supporting leader---then up to two helmet hits may be counted.. Only Pompey & Oroeses can support friendly units engaged in close-combat or battle-back on adjacent hexes—all the other Leaders can only support units they are stacked with in combat.

Units and the Rally Card:. No unit can be rallied to beyond five blocks or its strength at the start of the game whichever is less. If a Player rolls “swords” when attempting to rally he may freely chose which unit gets a block back.

Heavy & Medium Foot Special Ordered non-Combat Moves:
Heavy and Medium Foot units on both sides ordered to move with any card except “Double Time” or “Line Command” may move two hexes as long as they do not start or end or pass through hexes adjacent to enemy units. (note: this rule was added to increase mobility on this extended map for both sides).

Roman Legionary Infantry & other Special Roman Army Rules:
The following types of infantry units in the game on the Roman side are assumed to be Roman Legionaries: ALL Roman Heavy & Medium Infantry.
Roman Pilum:
Each Roman Legionary Infantry unit starts with a Pilum Marker. The Pilum is a one-time use weapon that is generally fired right before a Roman Legionary unit attacks in close-combat or is itself attacked by the enemy in close-combat. Once the Pilum is fired the Pilum marker is removed from the Roman unit to indicate that the Pilum has been expended and the unit may not throw Pilum for the rest of the battle.Just before a Roman unit with Pilum is attacked or is itself attacked by the enemy for the very first time in the battle in close-combat it throws its Pilum—roll one die and apply normal hits for swords, color, or a Flag/retreat hit Afterwards remove the Pilum marker. The act of throwing the Pilum is not considered to be part of the Close-Combat—so any result of the Pilum throw is resolved before the Close-combat. An attached Leader may use his special ability to cancel a “swords” hit that was inflicted via a Pilum hit (see special Command rules) on the unit he is stacked with.
Roman units, adjacent to the enemy, that have not expended their Pilum may also be ordered to throw Pilum if the card “Darken the Sky” is played by their commanding player. The  Player picks one adjacent enemy unit and throws two dice –apply the results just as one would before close combat—and remove the Pilum Marker.

Roman Veteran Initiative:
Up to Two Roman Legionary Heavy Infantry (and/or Elite Heavy Infantry) units per Roman Player-turn that are ordered by Line Commands or an “Order Heavy Troops” card may move two hexes and close combat at their option.

Elite Legionaries
Note two of the initial Roman Heavy Infantry units start the game with five blocks rather than the normal four blocks. These are crack veteran troops, they are treated as normal Roman Legionary Heavy Infantry for all other purposes, but have the advantage of an extra block and may rally back to a full five block strength through use of a rally card.

The Albanian Oriental Army Special Rules
Oriental Army: The Albanian Army is assumed to be a typical, but somewhat well trained Oriental ‘horde’, greatly outnumbering, but inferior in equipment, discipline, skill. and fighting spirit to the forces of the Roman Republic’s Legions---In Close Combat and Battle Back ALL Albanian units, save their Heavy Cavalry & Warrior foot make no hits on their enemies if Swords are rolled—always consider Swords to be a ‘miss’ when rolled by the Albanian Player unless the unit is a Cataphract Heavy Cavalry or the Warrior foot unit involved in the close-combat or battle-back.

Albanian Cataphracts: ALL Albanian Heavy Cavalry is heavily armored—therefore they always ignore the first sword hit inflicted upon them in close-combat or battle-back, or hits from missile or pilum fire. Albanian Heavy Cavalry may never evade battle, and unlike most other Albanian units hit on sword rolls as noted above.

Albanian Horse Archers: When missile firing at a three hex range Albanian Light Horse Archers do so with only 1 dice regardless of whether or not they have moved.

Outflanking
This is an easy way of introducing facing and flanks to the game with little fuss—it can be retrofitted to other scenarios where appropriate:
A unit is said to be “Outflanked” if it is surrounded in all six adjacent hexes by either enemy units, or hexes adjacent to an enemy unit. The presence of friendly units or impassable terrain does not negate an “Outflanked” situation in any way. Units on the board edges (and not surrounded by six adjacent hexes) cannot be “Outflanked”.
Effects of being Outflanked: “Outflanked” units when battling back roll only half the normal number of dice they would be normally entitled to rounded up—to a maximum of only two dice—“Outflanked” units when battling back never hit on helmet rolls even if supported by a leader. A unit’s “Outflanked” situation is judged
at the instant it battles back.

Entry of initially off-map Roman units/leader onto the map:
In order to bring on all his off-map units and the initially off-map Legate Leader, the Roman  Player may bring them on by playing any Leadership Card (regardless of type or section) in lieu of using the card to order units on the map. The off-map units/leader arrive in any vacant hex on the Roman mapboard right section in mapedge hexes numbered 1 (A1, B1, C1 etc .through to I1 on Map 1 or A1, B1, C1, D1 on Map 2). The arriving units/Leader enter those clear hexes as their initial entry hex and then move one hex and battle on their turn of entry. The Roman Player may not enter his off-map units/leader until his 3rd Player-turn or later.

Optional Rule: Albanian Initial Attack Imperative:
Note: This optional rule requires the Albanian Player to attack the Roman Cavalry just as the Albanians historically initially attempted to do when they were suckered in by Pompey’s stratagem).
On his very first Player-turn the Albanian Player must attempt to attack (regardless of any resulting Roman evasion) at least two different Roman cavalry units via close-combat. If he fails to do so the Roman Player immediately gains 2 Banners.