Written by Travis Taliaferro. Posted in Greek City-State battles (700-500 BC)

Historical Background
Encouraged by favorable omens, a Spartan army under the command of King Cleomenes advanced into the Argolid in 494 BCE to establish the dominance of the Lacedaemonians in the Peloponnese .  After feigning an overland advance, Cleomenes and his army, estimated at 5000 strong, landed near Tiryns on the east coast of the Gulf or Argolis , only to be blocked by a larger Argive army along the direct route to Argos.  After coming into contact with the Argive lead elements, Cleomenes seemed content to halt his advance and observe the superior numbers of the opposition.
After making the Argives believe they had settled into a boring camp routine, the Spartans surprised them by attacking as they were making preparations for dinner shortly before sunset.  Charging into their disorganized enemy on a makeshift battlefield, the Spartans resorted to rather dishonorable tactics to make their victory a more complete one than was usually seen in Hellenic Greece.
The initial rout had driven the Argives back into the Sacred Grove of Argos, where they likely hoped to make the Spartans pay for every foot of contested territory.  Cleomenes instead resorted to treachery, first calling out individual Argive hoplites out by name under the guise of ransoming them back to Argos, and instead executing them on the spot.  When the remaining Argives become aware of the double-cross, Cleomenes set fire to the grove, and those who did not die in the blaze were killed as they emerged from the trees.
Although it is undoubtedly difficult to separate fact from legend, a major reason for the refusal of Argos to join the Hellenic resistance to the Persian invasion four years later may have been due to the disastrous losses they suffered at Sepeia, and not the “Medism” (suspected Persian sympathies) that caused the other city-states of Greece to shun Argos after the Greco-Persian wars.  Regardless of whether or not the entire Argive army was lost, as reported by Herodotus, the defeat firmly established Sparta as the primary military power on the Peloponnese in the early 5th century BCE.
The stage is set. The battle lines are drawn and you are in command. Can you change history? 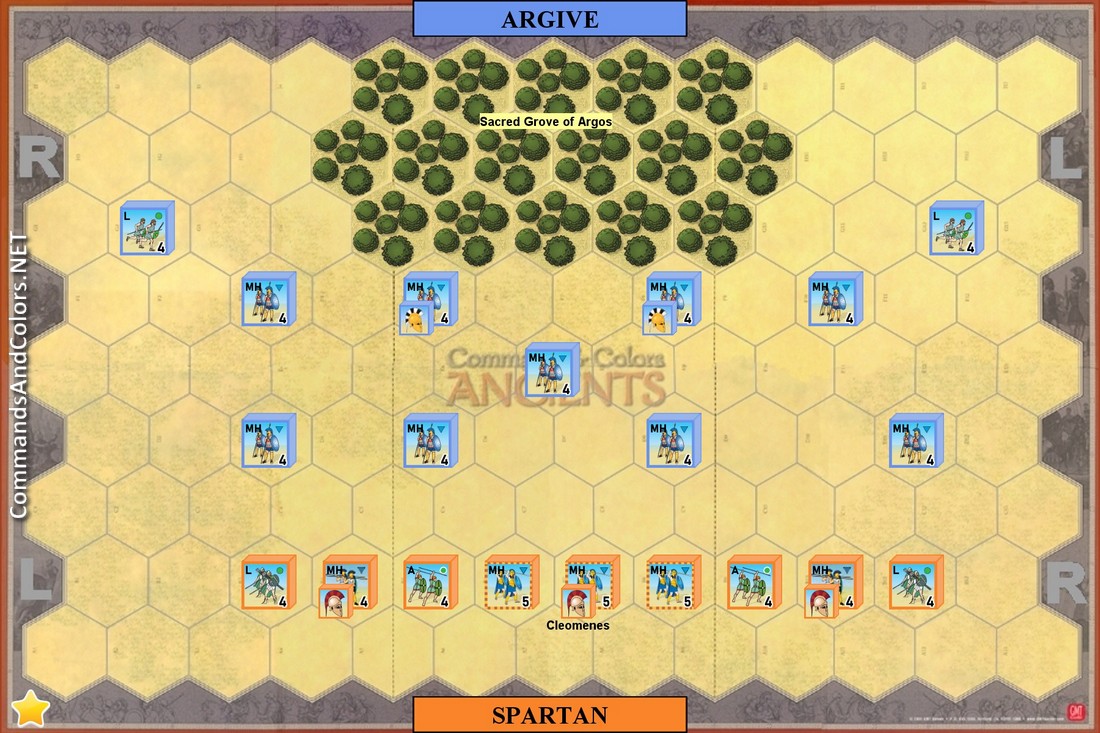 Special Rules
"Sacred Grove of Argos"
Historically, the Argives retreated into the grove during the battle to escape the Spartans, only to have Cleomenes set fire to the trees and force them out into the open.  If any Spartan unit moves adjacent to the grove, and remains adjacent, may on the next turn "fire" the grove.

"Firing the grove" has the following impact on gameplay:
1.  All units in the grove lose one block for each turn they remain in the sixteen grove hexes, plus one additional block for each grove hex they move into or through from that point on in the game.
2.  Units may exit the grove on the turn immediately following the grove being fired with no block loss.
3.  If a unit is forced to retreat or evade into the grove at ANY point after it is fired, it loses one block immediately for each hex into the grove it retreats or evades.
4.  Non-moving units take block losses at the beginning of their turn.