Historical Background
Following some forty years after the first conflict ended in a decisive victory for the Spartans over their Messenia foes, the Second Messenian War became a widespread rebellion lasting from approximately 660 - 650 BCE, that drew nearby poleis into the conflict as well. After a disputed victory over a Spartan army at the Battle of Deres, Aristomenes, destined to become an early heroic figure of Messenia, was given undisputed command of Messenian forces.
The following year, Aristomenes goaded the Spartan forces into advancing into Messenian territory and offering battle. The two forces and their respective allies met at a place called Boar’s Grave in Stenyclerus and drew up for battle, after offering sacrifices and consulting the prophecies of seers. In particular, the Messenian seer Theoclus bade that Aristomenes not to pass beyond a lone wild pear tree that stood alone on the battlefield. Aristomenes and his hand-picked elite force overwhelmed Anaxus and his King’s Guard in the early stages of the battle, and eyewitnesses claim that Aristomenes himself fought courageously all over the field, turning the battle into a rout. However, Theoclus’s words proved indeed prophetic, as Aristomenes lost his shield in a confused pursuit of Spartan forces just beyond the pear tree, and in the ensuing hesitation lost considerable momentum and allowed the escape of some Spartans and their Corinthian allies.
Aristomenes followed up this victory with several smaller raids, but was eventually defeated at the Battle of the Great Trench, which allowed the Spartans to regain the initiative and scatter the remaining Messenian forces. Spartan armies eventually captured the final Messenian strongholds, once again reducing them to helot status as after the first war.
The stage is set. The battle lines are drawn and you are in command. Can you change history? 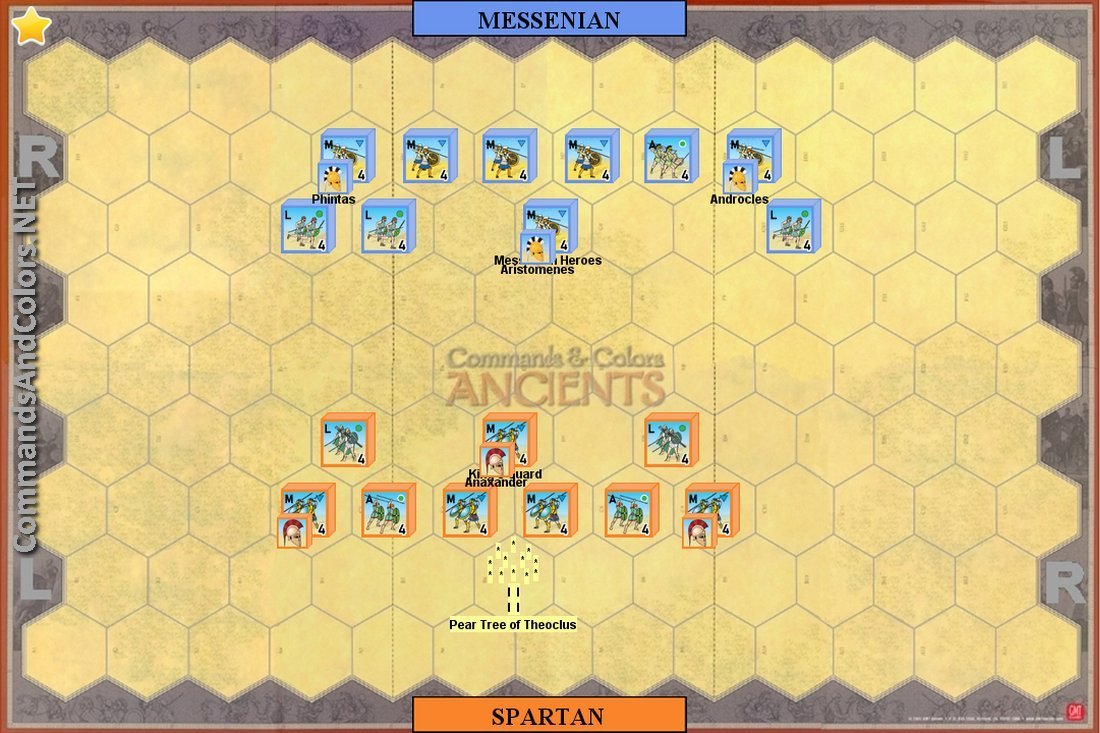