Written by alecrespi. Posted in Wars of the Delian League (477-449 BC)

Historical Background
The Greek victories at Plataea and Mycale in 479BC did not bring an end to Greco-Persian hostilities. The Greeks continued the war into Asia Minor, first under the leadership of Sparta, and when they withdrew from the fighting, Athens. The Athenians formed the Delian league consisting of those Greeks most threatened by the Persians.
In 466BC the Persians were gathering a fleet at the mouth of the Eurymedon river on the southern shore of Asia Minor, where they awaited reinforcement from a Cypriot fleet. Cimon, the Athenian commander of the Delian league forces, sailed his fleet to the Eurymedon in the hope of defeating the Persians before the Cypriots arrived. The Greeks won the subsequent naval battle and drove the battered Persian survivors ashore where they sought protection from an army commanded by Pherendates. Cimon did not want the Persians to recover from their defeat and so, even though his men were exhausted, he immediately landed his troops and marched along the shore to engage the Persians.
F. E. Ray estimates the Persian army consisted of 6,000 spearmen and archers, 3,000 Cabelee peltasts, 600 cavalry, and surviving marines from the fleet. The estimate for the Greeks is 6,000 hoplites, 2,000 marines, 800 archers, and light troops from the ship crews. The battle was a fierce struggle, but the more heavily armed hoplites prevailed before the Persian cavalry could turn the Greek flank, and the Persians were routed with heavy losses. This victory ended the Persian threat to Ionia and the Greek Islands, but saw the conversion of the Delian league into the Athenian Empire.
(Based on the book "Land Battles in 5th Century B.C. Greece" by Fred Eugene Ray.)
The stage is set. The battle lines are drawn and you are in command. Can you change history? 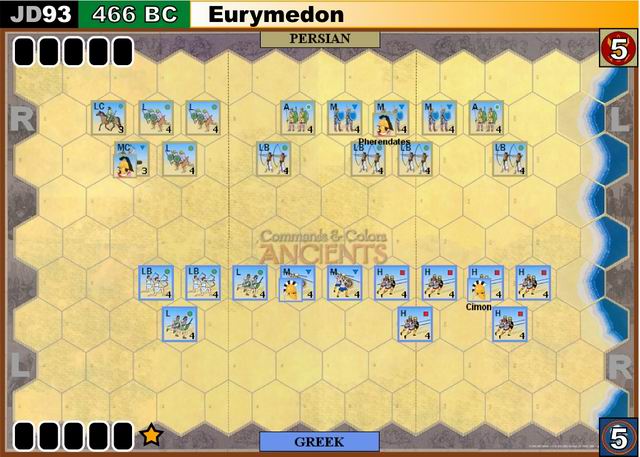