Written by Miguel Marques. Posted in First Peloponnesian War (460-445 BC)

Historical Background
After the end of the Persian Wars, the Delian League led by Athens and the Peloponnesian League led by Sparta often came into conflict, without declaring war outright. The First Peloponnesian War (460-445 BC) finally broke out due to Megara's defection from the Spartan alliance and the envy and fear felt by the Spartans at the growth of the Athenian Empire. Nicomedes of Sparta marched an army into Boeotia in 457 BC to intervene in a dispute between the Dorians and Phocians. He forced the Phocians to accept terms, but while he was in Doris an Athenian fleet moved into position to block their return across the Corinthian Gulf. As Athens had made a treaty with Megara, near the Isthmus of Corinth, the Spartan army was now stuck in Boeotia and decided to stay there and plan their return. The Spartans, while feared warriors, had not yet completely proven their dominance in hoplite battle, and were also weakened from a great earthquake in the Peloponnese and the helot revolt that resulted from it. Athens sent out an army to meet the Spartans and they came together outside Tanagra. The Athenians brought a large contingent of hoplites supplemented by a number of allies, including the Argives with 1,000 heavy infantry. The total number given by Thucydides is 14,000 plus a small contingent of Thessalian cavalry. The allied Spartan army consisted of 1,500 Spartans and 10,000 allied soldiers. According to Thucydides, the Thessalian cavalry joined the Spartan side during the battle, and the Spartans and their allies wore down and broke the Athenians. They su®ered heavy losses, but won the battle and opened the way back home. This was the first major land battle of the war and started a pattern of Spartan dominance in that theatre. Later in the war the Athenians had some successes, but the defeat of their Egyptian expedition and finally the revolts in Boeotia and Megara led in 445 BC to the Thirty Years' Peace... that lasted only fourteen: the Peloponnesian War would restart in 431 BC.
The stage is set. The battle lines are drawn and you are in command. The rest is history. 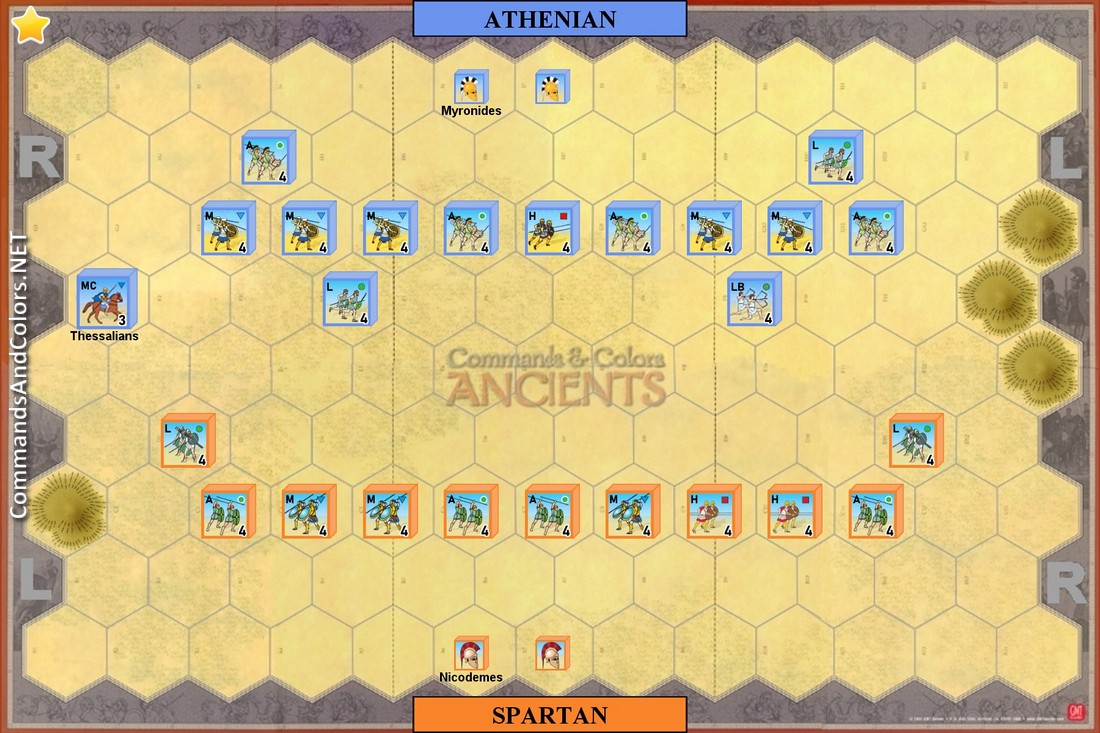 Special Rules
Little is known about the battle formations. Each player places his two leaders on the battlefield after reviewing his Command Cards, the Athenian first and then the Spartan.

Thessalians: the Spartan player can play Mounted Charge to order the Thessalian cavalry. They desert and are replaced by a full strength Spartan unit.