Historical Background
“…a few years later, in (circa) 148BC, the wheel of Roman treachery turned full circle. A new governor, Gaius Vetilius, had surrounded a force of ten thousand Lusitanian rebels. They were about to surrender when Viriathus, a minor guerrilla leader who had escaped the earlier Galba massacre (which happened during a supposed peace conference), rose in assembly to remind the Lusitanians of Roman promises and Roman deeds—and then to persuade them to an escape attempt….”

“During his retreat, Viriathus set up an ambush in a dense thicket. When these irregulars fell on the pursuing Romans, Viriathus doubled his main force back to the attack: (Appian says) ‘Vetilius himself was taken prisoner; and the man who captured him not knowing who he was, but seeing that he was old and fat, and considering him worthless, killed him. Of the 10,000 Romans, 6,000 with difficulty made their way to the city of Carpessus on the seashore’…..(From the two volume work: “War in the Shadows: The Guerilla in History” by Robert B. Asprey Volume I pages 23-24)

“Viriathus’s plan was simple, but effective. He had the Lusitanians line up outside the city gates, as if to give battle to the Romans. Keeping 1,000 of the best warriors in reserve, he then ordered the rest to scatter in different directions, with instructions to rendezvous in Tribola. Vetilius, unwilling to run down the fleeing raiders when Viriathus appeared to offer him an easy victory, did not give chase.”

“Viriathus and Vetilius fought a running battle for two days. The Lusitanian cavalry constantly attacked the Roman line, only to retreat before they could be effectively engaged—a strategy that Appian described as “dashing around on the (same) field”. After the second day , Viriathus and his men quit the field of battle under cover of darkness, moving quickly to join the rest of the Lusitanians at Tribola. “

“Vetilius followed, but was unable to keep up with the lightly armored Lusitanians. He tracked Viriathus deep into Lusitanian territory, walking into an ambush—nearly half the legionaries who entered the Lusitanian highlands never returned—Vetilius among them.”
“Thus began an eight-year guerilla campaign on the part of the Lusitanians, under Viriathus’s able leadership…”

(The above overview was from Ancient Warfare magazine Volume I, Issue 4 page 20 in an article called ‘Flame of Freedom’ by Ed Healy). 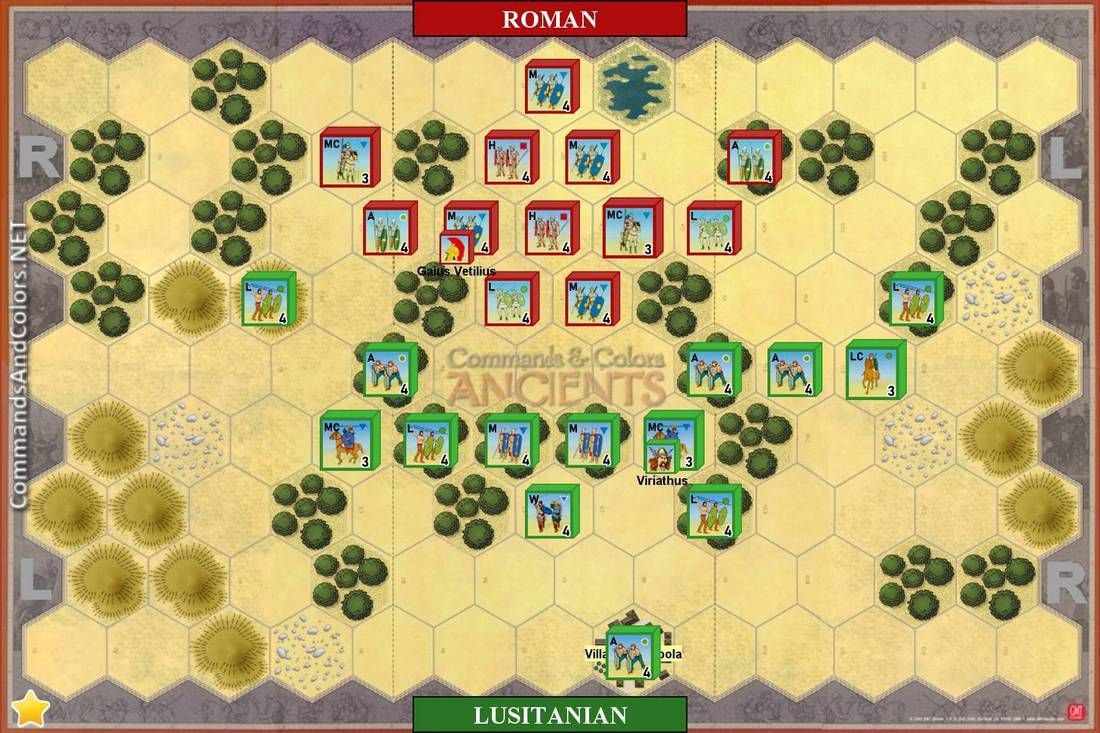 Special Rules
Roman Minimum Move: The Roman Player may always discard any one card from his hand and use that card to order any one of his units in lieu of taking a normal turn. At the end of this “minimum move” he draws another card as normal.

Line Commands in the Scenario: No more than five units can be moved by play of a single Line Command Card in the scenario for both sides Roman and Lusitanian.

Forest Hexes: Use Normal Rules, however Lusitanian light foot units entering such hexes via ordered moves may attack during the same player-turn.

All other terrain in the game uses the rules found in the rule-book.