Historical Background
With the withdrawal of Viriathus to Lusitania following the battles around Itucca, the Roman commander, Quintus Fabius Maximus Servilianus, decided to go on the offensive into southern Lusitania in order to encourage Viriathus into open battle. He captured many Lusitanian held towns, executed 500 rebel leaders and took 10,000 prisoners. The Romans were at some point ambushed by a force of 10,000 bandits and they lost much of their recently aquired booty. They soon recovered most of it and killed one of the two bandit leaders. With Viriathus not taking the bait, Servilianus ordered his army to return to Hispania Ulterior. On his way back he placed the Lusitanian held town of Erisana under siege. The wily Viriathus now saw his chance. With the Romans complacently digging their siege lines, Viriathus slipped his army into the town at night. At dawn he launched an attack and routed the surprised Roman construction parties. Servilianus rushed to the rescue with the rest of his army, but this too was defeated. The fleeing Romans were pursued into a place from where they could not escape and Servilianus was forced surrender the remnants of his army.
Viriathus, aware that his people were exhausted fighting the seemingly endless stream of Roman armies, saw an opportunity for peace. He offered Servilianus surprisingly mild terms, only asking that the Romans respect Lusitanian sovereignty and that he become an ally of Rome. Servilianus glady accepted and the Roman Senate later ratified the agreement. However, the Romans soon reneged on the deal, and before the end of the following year Viriathus had been murdered by three of his own close associates who had been bribed by the Romans. The Lusitanians were soon thereafter heavily defeated in battle, and with their spirit finally broken they surrendered unconditionally to Rome.
The stage is set. The battle lines are drawn and you are in command. Can you change history? 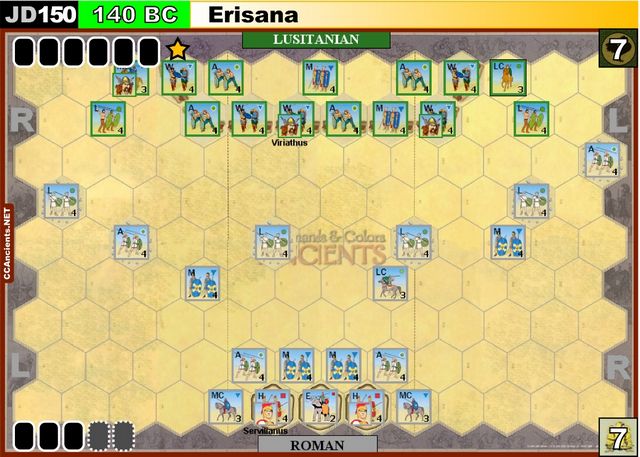