Historical Background
In 103 BC the Ptolemaic and Seleucid empires are riven by civil war. While Antiochus VIII Gyrpos and Alexander Cyzicenus contest the Seleucid throne, Cleopatra III in Egypt, and her son Ptolemy IX Soter in Cyprus, do the same over the Ptolemaic empire. The independant Hasmonean Kingdom in Judaea has taken the oppurtunity to expand under its leader John Hyrcanus, and then following his death in 104 BC, by his son and heir Alexander Jannaeus. In 103 BC Alexander placed the Seleucid city of Ptolemais-Ake under siege. With neither Seleucid contender able to help, Soter saw an opportunity for expansion and landed an army of 30,000 men on the Syrian coast. Alexander raised the siege and departed south, however, the residents of Ptolemais considered Ptolemaic rule as bad as Hasmonean and denied Soter entry to their city. Soter turned from saviour to besieger, and left part of his army investing the city, while the rest set off in pursuit of Alexander. The two armies met in Galilee near the village of Asophon.
We know that the Hasmonean army outnumbered the Ptolemaics and that Alexander placed 8,000 warriors with brazen shields in the centre of his line facing the heavy enemy centre. The battle was hard fought until a breach was created in the Hasmonean line. Alexander had formed no reserve to help, but the Ptolemaic general Philostephanos had created a reserve of auxilliaries, and he used these to exploit the success. The Hasmoneans crumbled and were slaughtered in their rout. Soter's success was shortlived as his mother came north with her other son Ptolemy Alexander and a large army, and Soter was forced to flee back to Cyprus. Cleopatra's success was also short lived as her 'loyal' son had her murdered and took her throne. As the cycle of internal conflicts continued within the Hellenistic dynasties, Alexander quietly resumed his expansion of Judaea and would rule as King for over quarter of a century.
The stage is set. The battle lines are drawn and you are in command. Can you change history? 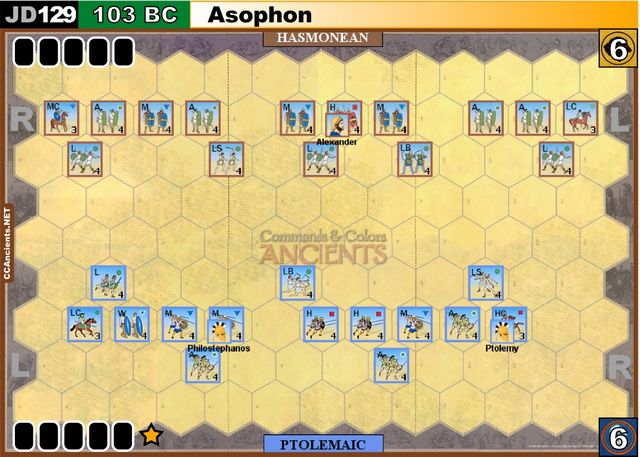