Historical Background
In 138 BC the Seleucid empire was once again in the throes of civil war. Antiochus VII Sidetes was fighting a Seleucid general called Diodotus Tryphon. Tryphon had acted as regent for the young son of the deceased pretender Alexander Balas, but Tryphon had the boy murdered and assumed the kingship for himself. Tryphon had tried to carve himself a domain out of  Judaea, where he captured and killed the Jewish leader Jonathan. Jonathan's brother Simeon then took over as leader and made an informal alliance with Antiochus against their common enemy. Antiochus was in the final phases of defeating Tryphon and so he felt he no longer needed his Jewish friends. In fact he ordered Simeon to hand back several cities to him. Simeon refused, and Antiochus despatched a general called Cendebaeus with a force of infantry and cavalry against Judaea. Cendebaeus fortified the town of Kedron on the coastal plain, from where he proceeded to raid into Judaea. Simeon responded by sending an army of 20,000 troops led by his son, John Hyrcanus, with his brother Judas.
The two armies faced each other across a stream to the north east of kedron. John split his infantry into two groups, with the cavalry between, but the Hasmonean troops were reluctant to cross the river until John himself led them over. The Seleucid army was routed back to kedron and beyond and lost 2,000 men killed. Antiochus finally subdued Judaea in 134 BC after a siege of Jerusalem.
The stage is set. The battle lines are drawn and you are in command. Can you change history? 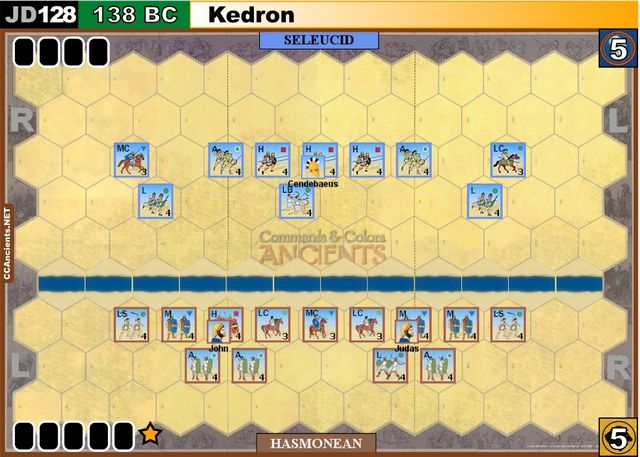