Historical Background
After the death of Judas Maccabaeus, his brother Jonathan took over leadership of the revolt. The Jews reverted to guerillla warfare against Bacchides until a peace agreement was eventually agreed between them. In 150 BC Syria was once again in turmoil with the pretender Alexander Balas killing Demetrius I and seizing the throne, and then contesting it with Demetrius' son. Jonathan took advantage of this chaotic situation to extend the Hasmonaean dynasty and in so doing came into conflict with the Seleucid governor of Coele- Syria, Apollonius Daus. In 147 BC, Jonathan and his brother Simeon took the city of Joppa with an army of 10,000 men. Apollonius appeared with his army of 8,000 foot and 3,000 horse and then proceeded to withdraw to Ashdod (Azotos) so as to draw the Hasmonaeans into an open plain where the Seleucid advantage in cavalry would give Apollonius the advantage, or so he hoped. Apollonius also set an ambush of 1,000 horse archers, but when they attacked the Hasmonaean rear, Jonathan ordered his army to form square until the enemy's arrows were exhausted. He then ordered an attack against both Seleucid forces. The Seleucids broke and fled and Jonathan was able to capture Ashdod. Bar-Kovch believes that by this stage in the revolt the Jews now possessed semi-heavy and heavy (phalanx) troops along with cavalry, which is why Jonathan accepted battle in the open and was able to defeat the Seleucid cavalry and heavy infantry.
The stage is set. The battle lines are drawn and you are in command. Can you change history? 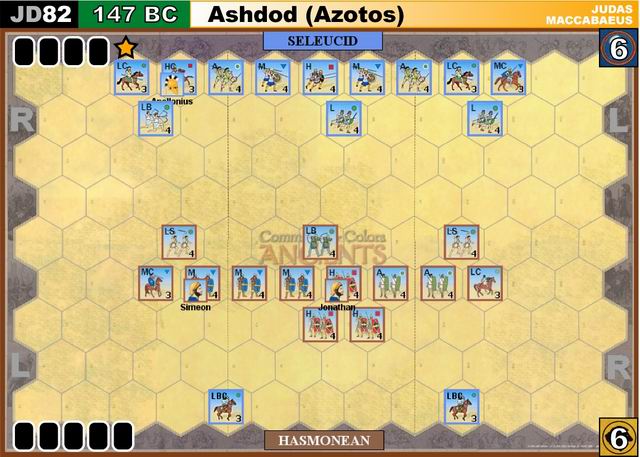 Special Rules
One of the Seleucid starting cards must be "Darken the Sky" and this must be played on their first turn.