Historical Background
Pompey arrived at Antioch in 64 BC and set about redesigning the surrounding regions to his liking. The old Seleucid heartland of Syria became a Roman province. The Hasmonean Kingdom was drastically reduced in size. Aristobulos dissented, and he and his family were shipped off to Rome, the walls of Jerusalem dismantled, and his brother, Hyrcanus II, installed as high priest. However, on the journey to Rome Aristobulos's eldest son, Alexander, escaped back to Palestine, raised support, took Jerusalem from his uncle, and began to rebuild its walls. The Romans, with other local problems to contend with, showed little interest in Alexander until the arrival in Syria of a new governor, Aulus Gabinius. Gabinius had designs on invading Parthia, and he therefore wanted to clear up any problems in his rear before heading east. He assembled an army to invade Judea, consisting of a Roman Legion, auxilliaries recruited by his lieutenant Mark Antony, and a force of pro-Hyrcanus Jews led by Peitholaos and Malichus. Alexander met the Romans near Jerusalem with his army of 10,000 foot and 1,500 horse.
It appears that initially only the Jews and Antony faced Alexander, but with the arrival of Gabinius and his Roman regulars, Alexander lost the battle along with 3,000 men killed and as many captured. Surprisingly, Alexander suffered no punishment other than losing his Kingship. Hyrcanus was once again made high priest. There were four further uprisings by the Hasmoneans, until Rome finally replaced their rule with the Idumaean King Herod in 37 BC.
The stage is set. The battle lines are drawn and you are in command. Can you change history? 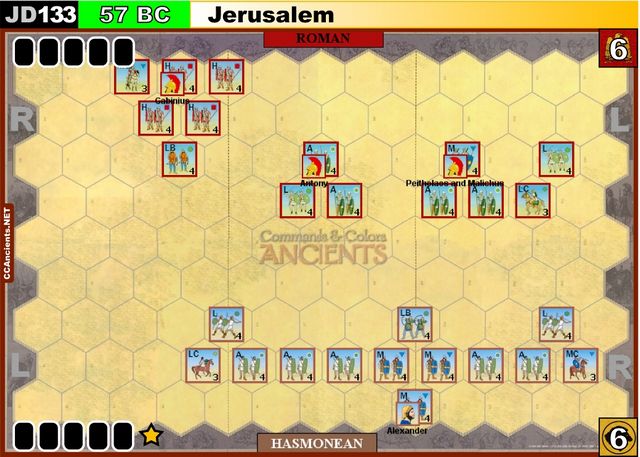 Special Rules
The Julian Legions rule is in effect, but for Roman heavy infantry units only.

The leader marked as "Peitholaos and Malichus" represents two leaders, but is treated as one leader for all game purposes.