Historical Background
Alexander Jannaeus died in 76 BC, and his wife Salome Alexandra became Queen. She died in 67 BC, and her eldest son, Hyrcanus II, became King, but his younger brother, Aristobulos II, was far more dynamic and favoured as a leader. He challenged Hyrcanus to battle, during which much of Hyrcanus's army changed allegiance, and Hyrcanus gave the kingship to his brother. An influential Idumaean man, and father to Herod the Great, called Antipater, was a supporter of Hyrcanus, and he negotiated an alliance with King Aretas III of Nabataea in return for some Hasmonean territory. Aretas headed for Jerusalem with an army of apparently 50,000 or more, but this is clearly far too many. Aretas defeated Aristobulos, who fled to Jerusalem, while much of his army switched once more to Hyrcanus. The allies placed Jerusalem under siege.
Meanwhile the legate of Pompey was in Syria assessing the general situation. This man used Roman clout to confirm, pending approval by Pompey, Aristobulos as King, and that Aretas should return home, or become an enemy of Rome. Aretas complied, and with the moral defeat of Hyrcanus and his ally, it seems that the Jewish army once more changed sides back to Aristobulos, as he was able to chase the withdrawing allies and inflict a heavy defeat on them at Papyron. In the battle the allies had 6,000 men killed, including Phalion, the brother of Antipater. Aristibulos was king once more, but for how long?
The stage is set. The battle lines are drawn and you are in command. Can you change history? 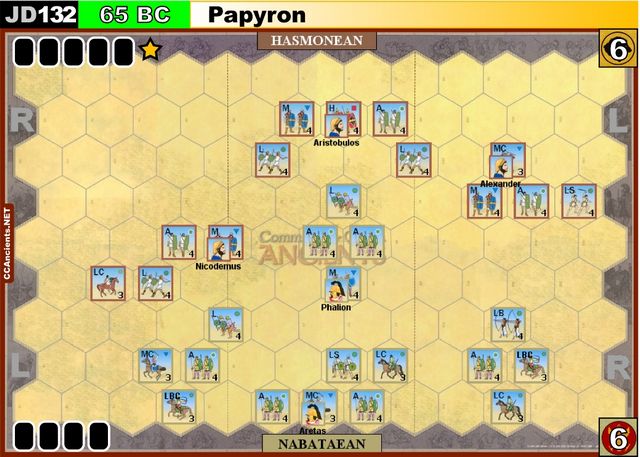