Historical Background
In 138 BC, The Seleucid king Demetrius II was captured whilst campaigning against the Parthians. His brother took his throne, and his wife, as Antiochus VII Sidetes. Antiochus then proceeded to suppress a rebellion by the former Seleucid general, Diodotus Tryphon, and then in 134 BC he campaigned successfully against the Jews in Judaea. He granted the Jews quite favourable terms and in return received an alliance with their king John Hyrcanus. With his political situation secure, Antiochus began planning for a re-conquest of the old Seleucid eastern territories from the Parthians. Antiochus launched his assault in 130 BC and was aided by a force of Jews led by Hyrcanus. He defeated the Parthians on three occassions, but the only known location was at the Lycus river against a Parthian army led by a man named Indates. In an efort to placate Antiochus the Parthian King Phraates II released Demetrius, but the war continued. In the winter of 129 BC the Seleucid army was billeted into various locations. The Parthians attacked the isolated garrisons, and when Antiochus rode to the rescue of one such portion of his army he was ambushed and killed. This was the last Seleucid attempt to retake the east. Demetrius II regained his throne, but the empire degenerated into a spiral of power struggles that resulted in first Armenian, and then Roman rule in 65 BC.
The stage is set. The battle lines are drawn and you are in command. Can you change history? 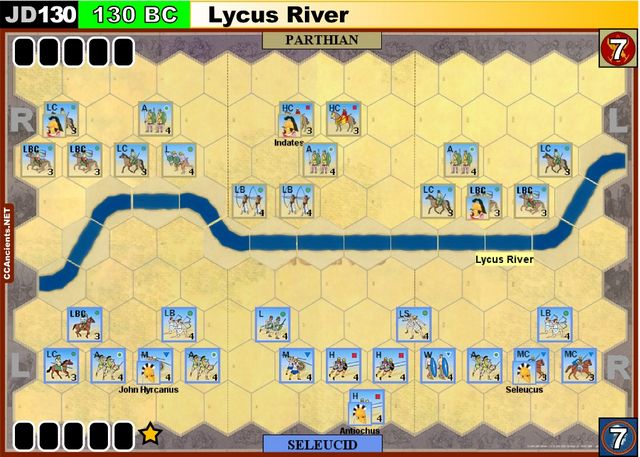