Historical Background
In 652 BC, the Assyrian king Assurbanipal led an army south to the ancient kingdom of Elam, bordering the Persian Gulf. This was a punitive expedition in response to insulting messages sent to Assurbanipal by the Elamite king, Teumann. Teumann crossed the Ulai River and met the Assyrians on its north bank. The Assyrians quickly overwhelmed the Elamites, driving them back into the Ulai and choking its waters with their dead.
“At the command of the gods, like the onset of a terrible hurricane, I covered Elam in its entirety……… With their corpses I filled the plain about Susa as with plants. Their blood I let run down the Ulai; its water I dyed red like wool.”
Teumann attempted to escape in his war cart but was toppled from it when its axle broke. Despite an attempt at rescue by his son, Tammaritu, both were surrounded by Assyrian troops and killed. Teumann’s head was taken to Assurbanipal as a trophy. Assurbanipal extirpated Teumann’s royal line and sacked the Elamite capital of Susa in 647 BC. The fate of Teumann was displayed in a stone relief of the battle on the walls of Assurbanipal’s royal palace in Nineveh as a graphic warning to others who might resist Assyrian might.
The stage is set. The battle lines are drawn and you are in command. Can you change history? 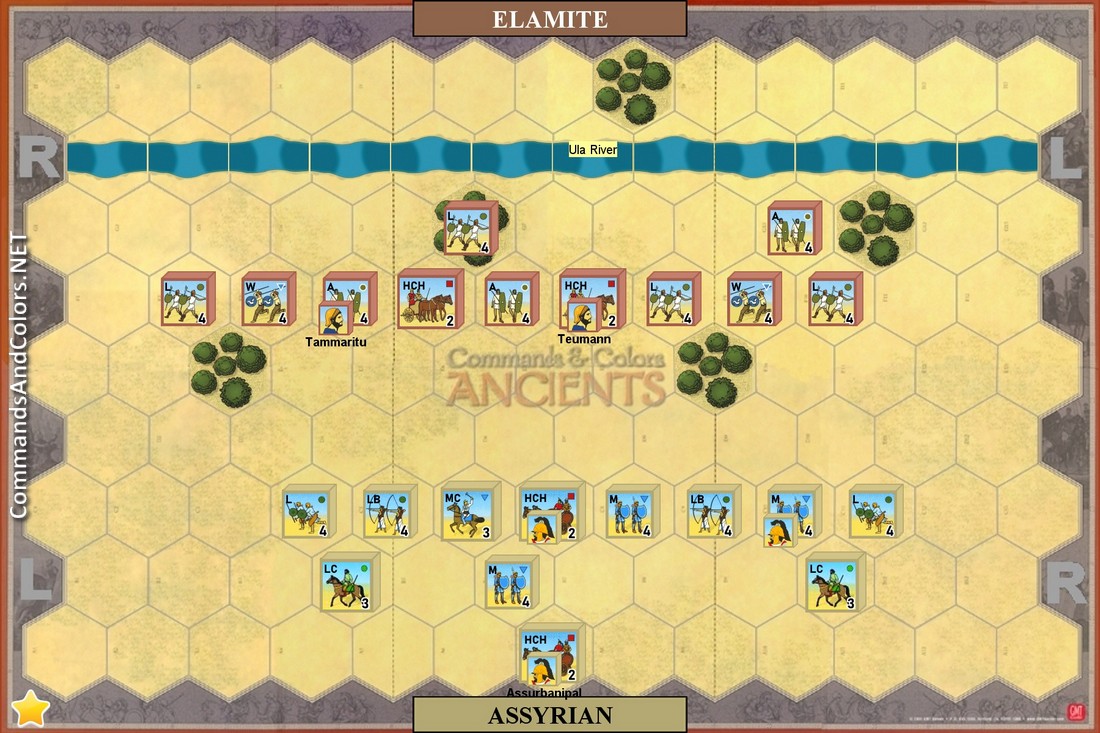 Special Rules
The River of Death - The Ulai River is fordable along its entire length. Elamite units which retreat or evade onto or through a river hex lose 1 block when they enter the river hex. Elamite leaders who perform a leader evade onto or through a river hex are destroyed and one Victory Banner is awarded to the Assyrian player. Ordered Elamite units or leaders which enter river hexes are unaffected.

Teumann’s Folly - Teumann may not be voluntarily detached from his war cart (Heavy Chariot) unit. If Teumann’s war cart evades or retreats, and if there were any swords rolled in the Assyrian combat roll which caused the retreat or evasion (even if that combat would not usually hit on swords), Teumann’s chariot unit is destroyed and 1 Victory Banner is granted to the Assyrian player. A normal 1 die leader check is rolled against Teumann and he must perform a leader evade as normal. If he survives the leader check, Teumann may then attach to an Elamite unit following normal leader rules.