Historical Background
In 701 BC the Assyrian king Sennacherib marched into Judah to deal with a rebellion against Assyrian suzerainty led by the Canaanite king, Hezekiah. Unable to match the Assyrian army in the field, the Canaanites took refuge in their walled towns and cities.
“As for Hezekiah the Judahite, who did not submit to my yoke: forty-six of his strong, walled cities, as well as the small towns in the area, which were without number, by leveling with battering-rams and by brining up siege-engines, and by attacking and storming on foot, by mines, tunnels, and breaches, I besieged and took them.”
Sennacherib then laid siege to the kingdom’s two largest cities. He personally directed the assault on Lachish, an imposing fortress city atop a high plateau, while sending subordinates to invest Hezekiah’s capital of Jerusalem thirty miles to the northwest.
To access the walls of Lachish, Sennacherib ordered the construction of a huge siege ramp of stone and mortar at the plateau’s southwest corner, where the city’s gatehouse stood. Under a furious hail of missiles and flaming torches, Assyrian spearmen, archers and slingers assaulted the city walls, while wheeled siege engines climbed the siege ramp to the gates. Despite determined resistance from Lachish’s defenders, the gates were breached and the Assyrians stormed the city.
Consistent with Assyrian practice, key leaders of the city were brutally tortured and killed, and the rest of the population was deported for a life of hard slave labour. By his own accounts, Sennacherib then raised the siege of Jerusalem after exacting heavy tribute from Hezekiah, and returned to Nineveh.
The stage is set. The battle lines are drawn and you are in command. Can you change history? 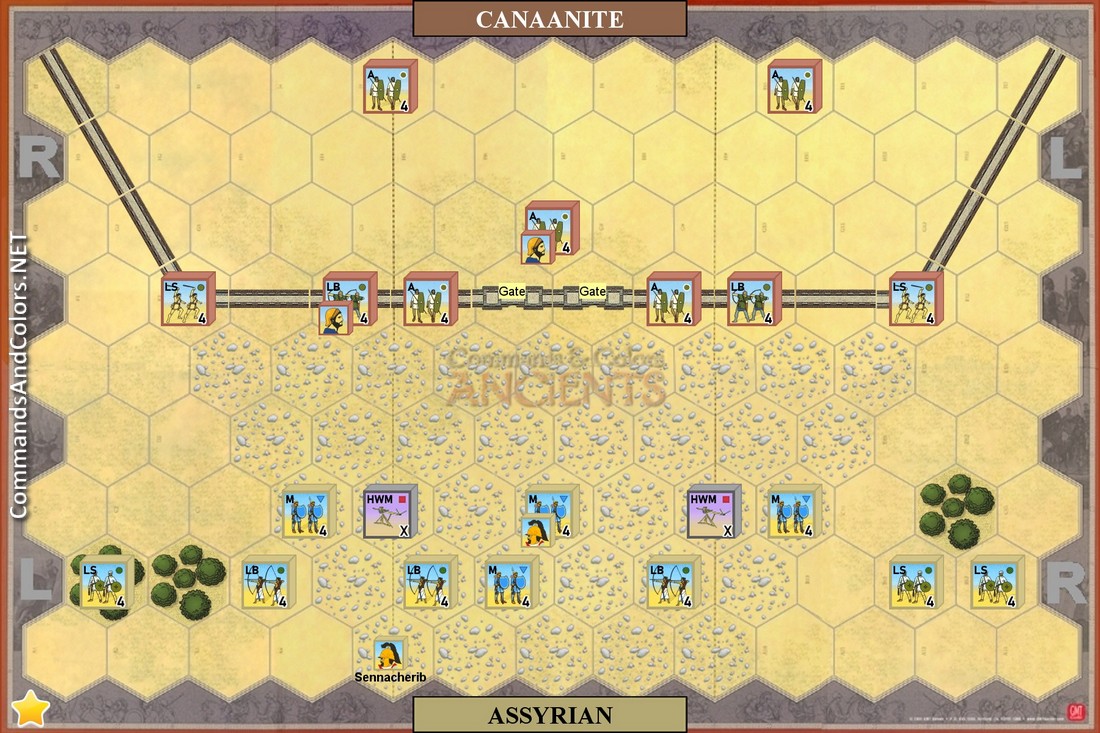 Special Rules
The Walls of Lachish - The walls of Lachish, including the Gate tiles, follow the rules for Scalable City Walls. Outer wall hex sides which are not adjacent to a siege ramp tile are impassable from the Assyrian side. Wall hexes are impassable to siege engines. Each time a wall section is destroyed by a siege engine, the Assyrian player gains one Victory Banner. If both Gate tiles are destroyed, the Assyrian player immediately wins the battle.

The Assyrian Siege Ramp - The Assyrian siege ramp is represented by Broken Ground hex tiles. These tiles have no effect on movement or combat. Outer city wall hex sides which are adjacent to siege ramp hexes are passable.

Fire From the Walls - All Canaanite units on city wall hexes may ignite Assyrian siege engines when combating them. Any sword rolled by a Canaanite unit in ranged or close combat against a siege engine will ignite it, even if a sword result would not usually have any effect for that combat roll. If the attacking unit would usually inflict a hit with a sword roll in close combat (Auxilia), the Canaanite player may choose whether the sword either ignites the siege engine or inflicts one hit.

The War Machine blocks represent Assyrian Siege Engines and follow these rules:
Assyrian siege engines are represented by Heavy War Machine blocks. They are red square 3 block Heavy foot units which have 1 hex movement. They battle with 2 dice in close combat and do not hit on swords. They battle with 2 dice in ranged combat, or 1 die if they move that turn, with 2 hex range. They may ignore 1 flag and 1 sword. They may not evade.
When an ordered siege engine starts the turn adjacent to a city wall tile, it may assault the wall. A siege engine may not move or battle on a turn it assaults a wall. Instead of battling, the siege engine rolls 2 dice, and breaches the wall if it rolls a sword, removing the city wall hex from play.
In some scenarios, units defending a city wall may have the ability to set a siege engine on fire. Mark ignited siege engines with a special unit block. At the end of every Assyrian turn, before drawing a command card, any siege engine that is still on fire loses 1 block. An ignited siege engine may forgo both movement and battling or assaulting a city wall to automatically douse its fire on any turn that is ordered, removing the special block.