Historical Background
After their victory in the 3rd Macedonian War Rome divided Macedonia into four independant republics, a solution many Macedonians disliked. A man named Andriscus saw an opportunity to exploit the Macedonians desire for a united monarchy. He claimed to be the son of the former King Perseus and went to the Seleucid King Demetrius for assistance in taking the throne. Demetrius had him arrested and sent to Rome,but the Romans were not particularly concerned and Andriscus was able to escape. He eventually arrived in Pergamon where he received moral and financial backing from a former Macedonian princess. Andriscus travelled to Thrace and successfully courted several Thracian chieftains who garnished him with troops and a diadem. In 150BC he was accompanied to Macedonia by the chieftain Barsabas where they defeated a Macedonian force near the River Strymon.
In 149BC Andriscus swept into power on a wave of popular support as Philip VI of a united Macedonia. He brutally dealt with any political opponents. Rome responed by sending Scipio Nasica to sort the matter out diplomatically, but when this failed Scipio raised a force of local allies and was reinforced by the Praetorian army of Publius Juventius Thalna. Thalna assumed command and marched on Macedon. He no doubt expected an easy battle after the smashing Roman victories at Cynoscephalae and Pynda, but somewhere near the Macedonian border, his army was defeated and he was killed.
The stage is set. The battle lines are drawn and you are in command. Can you change history? 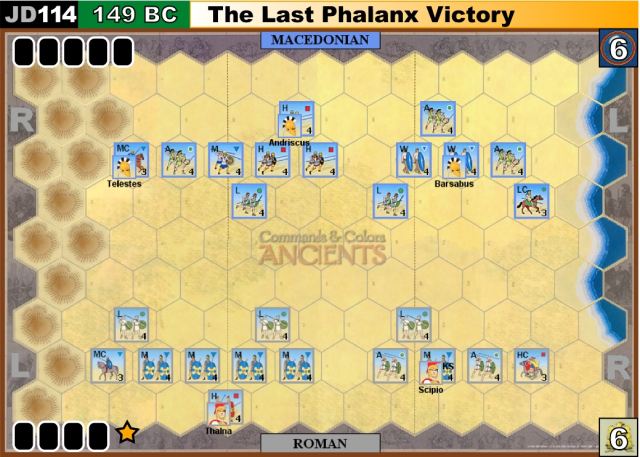