Historical Background
The First Slave War began in 135BC when 400 slaves from the central Sicilian city of Henna rose in revolt against their oppresive Roman masters. A slave called Eunus was elected as leader of the revolt, supposedly due to his powers of prophecy and magic, but he must have had some leadership qualities in order to lead such a large scale revolt over several years. The slaves quickly amassed an army of about 10,000 men and easily defeated the Sicilian governor and his local militia. A smaller rising also occurred in western Sicily under the command of Cleon of Cilicia. The two men joined forces, with Cleon submitting to Eunus as overall leader. Eunus, being a Syrian, declared himself as King Antiochus and employed a Greek slave called Achaeus as his chief advisor.
With the Slave army now swollen to approximately 20,000 men, the Romans sent a Praetor, Lucius Hypsaeus, to deal with the revolt. The Ancient sources, mostly written by Romans and designed to show themselves in a better light, say that Hypsaeus had no troops of his own and only recruited 8,000 Sicilian allies before meeting the slaves in Battle. Hypaeus was defeated and his camp overun. I find it difficult to believe that with a similar force of local troops already having been beaten by a much smaller slave army that Rome would have expected Hypsaeus to do any better. It makes more sense that Rome would have given him a praetorian army, usually about 10,000 troops, to which the allied troops were then added. This is the battle I have depicted.
It was not until Rome began sending Full Consular armies that the Slave revolt was finally crushed in 132BC.
The stage is set. The battle lines are drawn and you are in command. Can you change history? 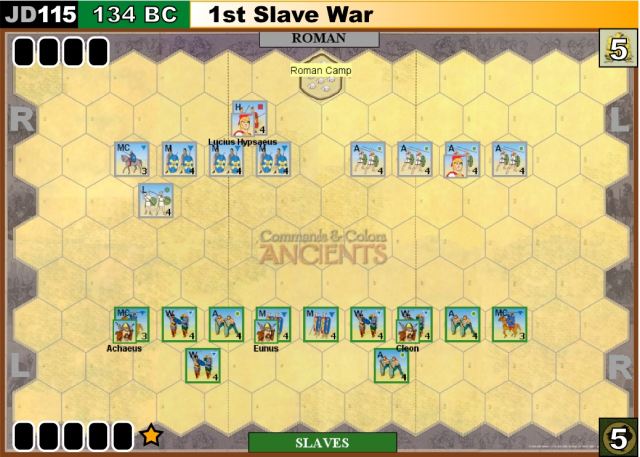 Special Rules
If a Slave unit ends its turn on the Roman camp tile, remove the camp marker and award the Slave player a victory banner.

OPTIONAL - If you wish to fight the battle as indicated in the ancient sources simply delete Hypsaeus and the six units with him and place the remaining Roman units in hexes G5 to G8. The unnamed leader now becomes Hypsaeus and victory is now at 4 banners. You may now see the logic behind my train of thought.