Historical Background
The Median empire arose out of the collapse of the Assyrian empire in 612BC, and stretched from eastern Asia Minor to India. The Persians formed two vassal states of the Empire until they were united under the leadership of the western Persian ruler Cyrus II sometime after 559BC. The Median ruler, Astyages, had always been wary of his Grandson Cyrus, as a dream had foretold that Cyrus would one day overthrow him. He had even tried to have the infant murdered by his general Harpagus, but when Harpagus spirited the boy to safety Astyages had Harpagus' son killed as punishment, something Harpagus would never forgive. With Cyrus openly defying the rule of Media, Astyarges was forced to march on Persia in 550BC. The Median and Persian armies met on the plains of Pasargadae to the south of the Median capital of Ecbatana. The battle was won for Cyrus when Harpagus went over to his side along with many disaffected nobles and their troops. Astyarges was captured but well treated by Cyrus who now ruled over the former Median empire with many Median nobles placed in positions of power.
The stage is set. The battle lines are drawn and you are in command. Can you change history? 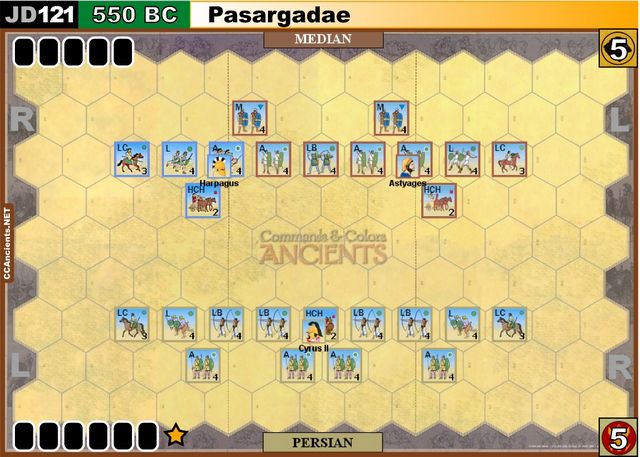 Special Rules
The four Greek units and Harpagus are the deffecting Median troops. They may never be ordered by the Mede player. The Persian player may only initially order these units (not on turn 1) by playing a Leadership Left, Centre or Any section card, or a Four left card. The units are ordered and are now part of the Persian army. You may now wish to replace them with eastern blocks.