Historical Background
"Darius' first campaign after the rebellions was directed towards the Central Asian frontier. This theatre was critical because of the Saka's intervention in the northeastern realms against Darius during the rebellion. Darius may also have wished to recover imperial prestige in Central Asia, especially after the death of Cyrus the Great at the hands of Queen Tomyris barely 20 years earlier. By 519 BC, Darius deployed his army against the Saka Tigrakhauda in modern-day Turkistan, east of the Caspian Sea. While scant details exist of specific battlefield tactics, the battles were hard fought. Faced with powerful resistance, Darius resorted to a particularly novel strategy. He boarded his army on ships based on the Caspian shores of northern Persia. These then sailed into the Caspian and swung east to land ...to the rear of the Saka Tigrakhauda, taking their leader, Skunkha, entirely by surprise. The ensuing battle resulted in an overwhelming victory for Darius who added the defeated and bound image of Skunkha to that of recently defeated rebels at the Behistun inscriptions."
Quote is from the book 'Shadows in the Desert' by Dr Kaveh Farrokh.
The stage is set. The battle lines are drawn and you are in command. Can you change history? 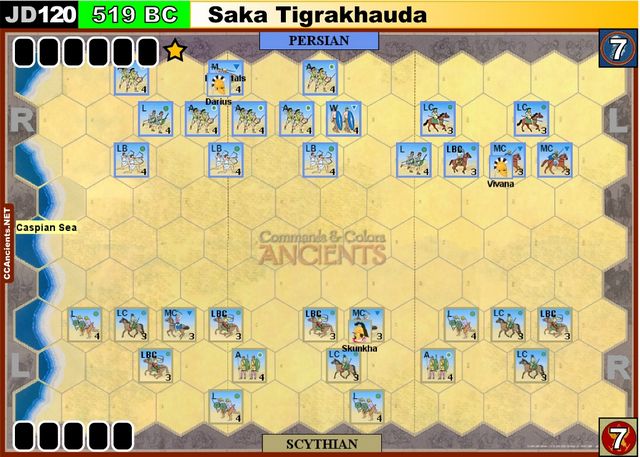 Special Rules
The Persian Immortal unit is a special unit. The Immortals are armed with bows and will also follow Ranged Combat rules.