Historical Background
After the inconclusive Battle of Pteria during the winter of 547, Cyrus pursued the Lydians to the very heart of their empire.  Croesus was able to gather a large army to oppose the Persian invaders on the plain of Thymbra near Sardis, and the two forces fought a massive battle, chronicled by Xenophon in his “Cyropedia” (which some historians have labeled more fiction than history).
According to Xenophon, and later Herodotus, the outnumbered Persians formed a square, with archers and mobile towers in the center, sparabara spearmen in the front ranks, and two detached wings of cavalry, set back from the infantry.  Cyrus anticipated the Lydians overlapping his square, and planned to counter Croesus’ heavy cavalry with men mounted on camels, which his generals had observed had a negative effect on Lydian horses.  Additionally, his general Abradatas commanded a unit of scythed chariots in the front of the square, and the Persians employed other heavy chariots on the wings with their cavalry.
Cyrus’ plans worked to perfection, as the embattled infantry, buoyed by the both the accuracy of the archers on the mobile towers and the self-sacrifice of Abradatas’ chariots, held off their Lydian adversaries just long enough for gaps to open on the Lydian lines.  The Persian camels forced the Lydian heavy cavalry to fight dismounted, and the Persian cavalry, led by Cyrus himself, surged into the breaches in the Lydian wings.  Despite the heroic resistance of the Lydian infantry, Croesus’ army was crushed, and the shattered remnants withdrew into the wall city of Sardis, which fell a fortnight later.  Lydia was annexed into the Persian Empire, and the stage was set with the future conflicts between the Achaemenid Empire and the emerging Greek civilization on the shores of the Aegean.
The stage is set. The battle lines are drawn and you are in command. Can you change history? 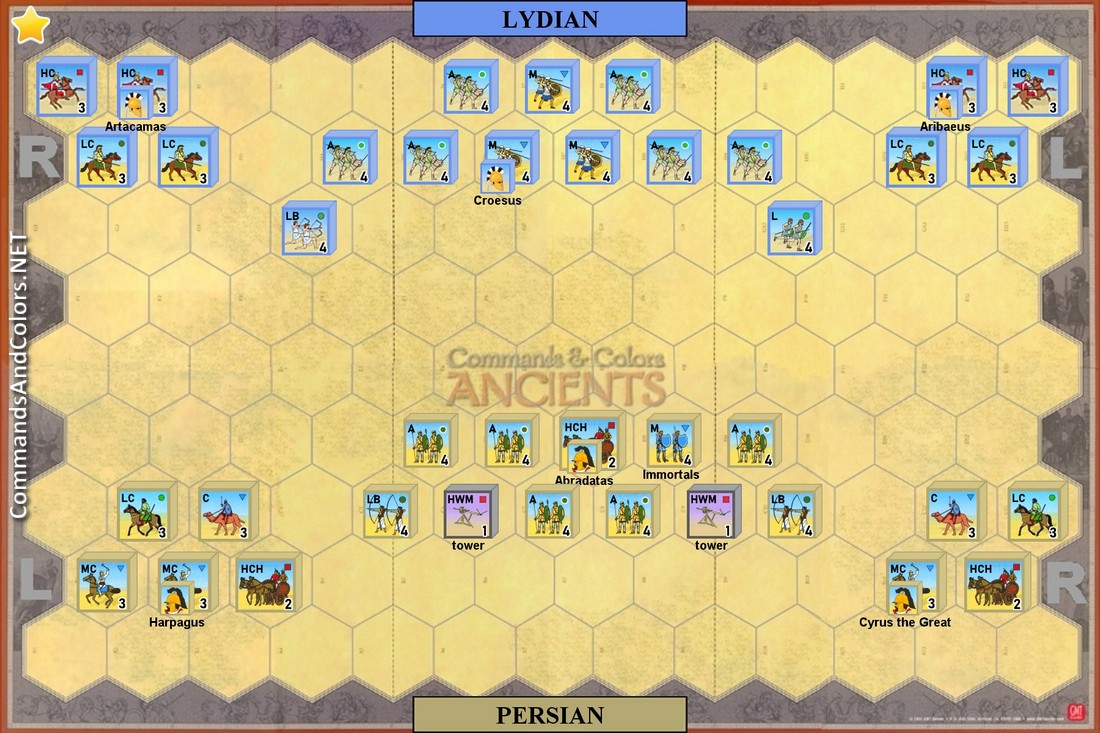 Leadership
The Lydian and Persian commands are reduced by one card, to 4 and 5 respectively, if either Croesus or Cyrus is killed.  This is reflected by a player NOT drawing a card at the end of their next turn.

apergis1@verizon.net wrote:
Just played this several times during the past few days. Looking for other scenarios with camels.

Magnesia & Nisibis are the 2 official ones

I made an Epic version of Magnesia
www.commandsandcolors.net/ancients/forum...pic&catid=36&id=1612
lot of toys for the Seluccids
apergis1@verizon.net replied the topic: #4263 7 months 2 weeks ago
Just played this several times during the past few days. Looking for other scenarios with camels.
apergis1@verizon.net replied the topic: #3506 2 years 5 months ago
My wife and I have tried both Thymbra scenarios. We have had the most fun playing this one.
Read More...