Historical Background
By 525 BCE, the only major territory in the Near East that had yet to submit to the Persian Empire was the ancient land of Egypt, which was itself under the dubious leadership of Psamtik III.  After trumped up charges of diplomatic impropriety against Psamtik’s predecessor, Amasis II (who died in 526), Cambyses II led a Persian expeditionary force across Arabia to bring Egypt under the heel of the Achaemenid Empire.
Although Egypt prepared for the Persian onslaught by fortifying the frontier along the Sinai, several factors were already working against them.  Along with civic unrest at home, and a pro-Persian coalition forming abroad, the Egyptian military faced questions of loyalty regarding the Greek mercenary elite of their army after the defection of Phanes, one of their top commanders, who instead helped the Persians negotiate the difficult desert crossing.
The pivotal battle of the campaign occurred at the border settlement of Pelusium, where the Egyptians offered battle to the superior Persian army, before the walls of the city.  Although legend states that the Persians unnerved the Egyptians by pinning cats (a sacred symbol of Egypt) to their shields, a more plausible explanation is that the flexible Persian army exploited the weaknesses of their Egyptian foes.  Although the Egyptians would have been able to counter the Persian infantry with Greek mercenaries and heavy chariots, Cambyses and his generals likely utilized archers and superior cavalry to first pin the densely massed Egyptian infantry in place, then exploit any weak points.
Regardless of the stratagems employed, the battle was identified by ancient historians as a hard-fought Persian victory, with no less than Herodotus himself personally chronicling the skulls of the combatants littering the battlefield years later.  The Persian victory at Pelusium opened the door for the eventual conquest of Egypt and the establishment of the empire as the largest the world had yet seen.
The stage is set. The battle lines are drawn and you are in command. Can you change history? 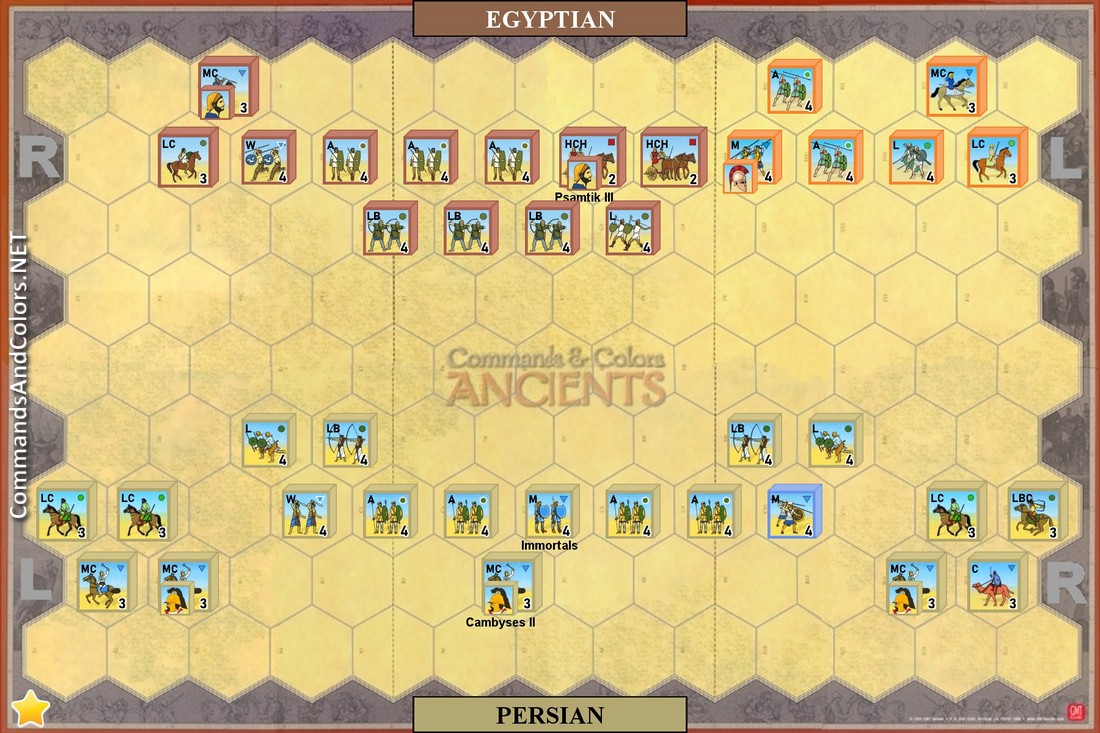 Special Rules
Persian Immortals: The Immortals unit is considered bow-armed (in addition to their normal medium infantry capabilities), and may ignore one additional flag.

Greek Mercenaries:  A leadership card used in conjunction with the Greek mercenary commander may only order the four Greek units.  There are no other leadership card command restrictions.