Historical Background
The Persian Empire, taking advantage of the swirling intrigues in the eastern Mediterranean, launched a campaign in 373 to retake Egypt, which had reclaimed its independence around the year 400. The Persian commander, the satrap Pharnabazus, enlisted the help of the Greek mercenary Iphicrates to add an offensive element to his expeditionary force. Iphicrates used the men and resources available to develop a hybrid peltast/pikeman unit, capable of both aggressive movement and limited front-line melee combat.
After sailing down the coast from Phoenicia and reaching the numerous mouths of the Nile, the Persians decided to avoid Pelusium and instead come ashore at the Mendesian mouth and establish a foothold there. Landing initially with its infantry and mercenaries, it met heavy resistance with an equal number of Egyptian troops who sallied forth from a nearby fortress. According to Diodorus, the battle was decided when the expeditionary force was able to land its additional marines and assorted light infantry and crewmen and overwhelm the Egyptians with numbers. The invaders surged ahead and “took possession of the fortress, razed it, and enslaved the inhabitants.” (Diodorus)
The success of this invasion was short-lived, however, as Pharnabazus grew suspicious of the loyalty of Iphicrates, who suggested immediate action against lightly-defended Memphis. Thus surrendering the initiative to the defenders, who were able to marshal an adequate number of defenders and use the rising Nile to menace the Persian position at the fortress, Pharnzabus soon ordered his force to reembark and withdraw from Egypt altogether.
The stage is set. The battle lines are drawn and you are in command. Can you change history? 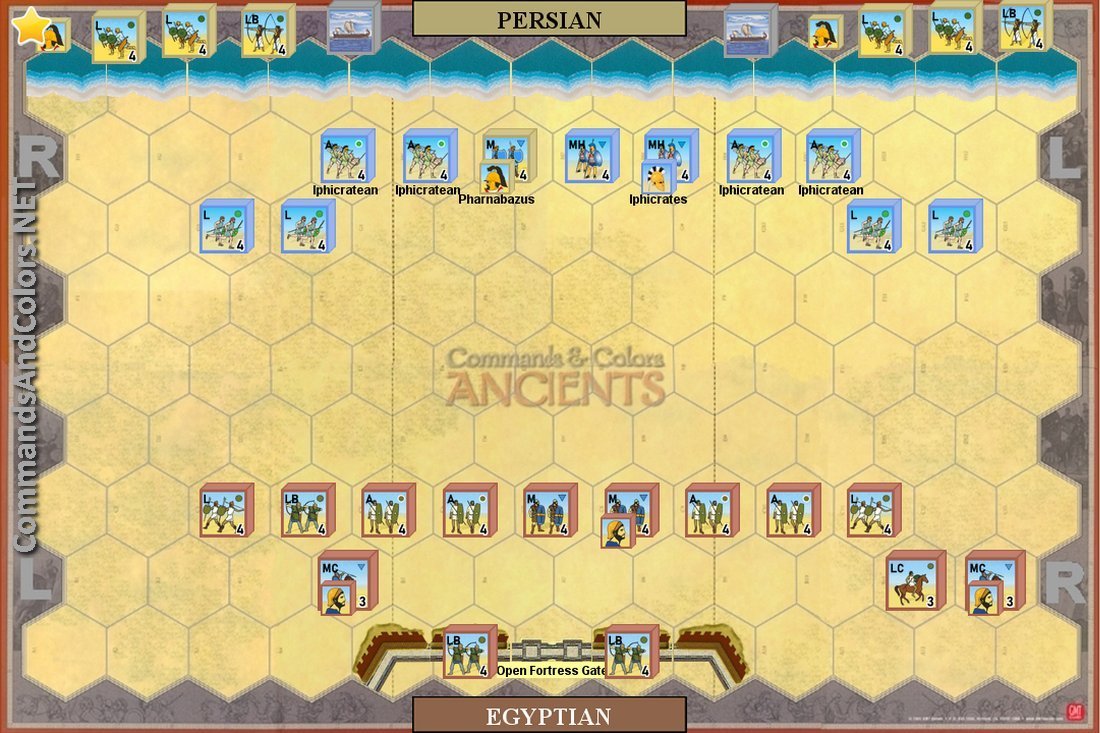 > Persian Reinforcements
>The Persian commander may bring in amphibious reinforcements by playing a Leadership card in the appropriate section and landing a ship upon a beach hex. (One set of ship/leader/3 units per card)

> Ordered units expend 1 MP upon leaving the vessel, may initially land on that beach hex or any adjacent beach hex, and must move an additional hex inland to avoid losing 2 blocks due to attrition if they remain on the beach hexes. Any unit not able to move off beach hex on 2nd turn is therefore eliminated.

> Units may conduct close and ranged combat on the same turn they are initially activated, as normal.

> Iphicratean peltasts - These units were specially outfitted by Iphicrates to be able to participate in close combat, and therefore have the following capabilities:

> Ranged Combat
- 1d ranged attack, up to 2 hexes, regardless of movement

> The Nile River is impassable. No units may retreat back to beach hexes, including amphibious reinforcements.