Historical Background
In the same year as the pivotal battle of Marathon, the Spartan colony of Taras came under attack from the local Italian highland tribe known as the Messapii, who themselves had occupied the southernmost portions of the Italian “boot heel” since their migration from Illyria.  Likely the strongest of the Iapygian tribes, the Messapian army moved against the Tarantines with a composite force of around 8,000 men including shield infantry, skirmishers, and their vaunted cavalry arm.

The Tarantines appear to have represented their Spartan roots well in this battle despite being outnumbered.  Along with 4,000 hoplites and 1,000 light infantry in support, the Tarantines also appear to have employed both light and wealthy sword-wielding cavalry, due to their establishment of a feudal-like system of land ownership.

*Although no definitive records exist that describe the battle that took place, I have again followed the description of battle put forth by Fred Ray, and deployed the Tarantine phalanx near the walls of Taras, with a tactical reserve ready to be committed by the Tarantine leader.  The Tarantines apparently withstood not only the initial skirmishing, but also both their enemy’s cavalry superiority and the inevitable highland charge.  The Tarantines claimed victory, and continued to solidify their presence in Magna Graecia as the region’s leading Greek power.  The Messapii would not challenge the polis of Taras again for a generation, but would take care to learn important lessons from this first major encounter.
The stage is set. The battle lines are drawn and you are in command. Can you change history? 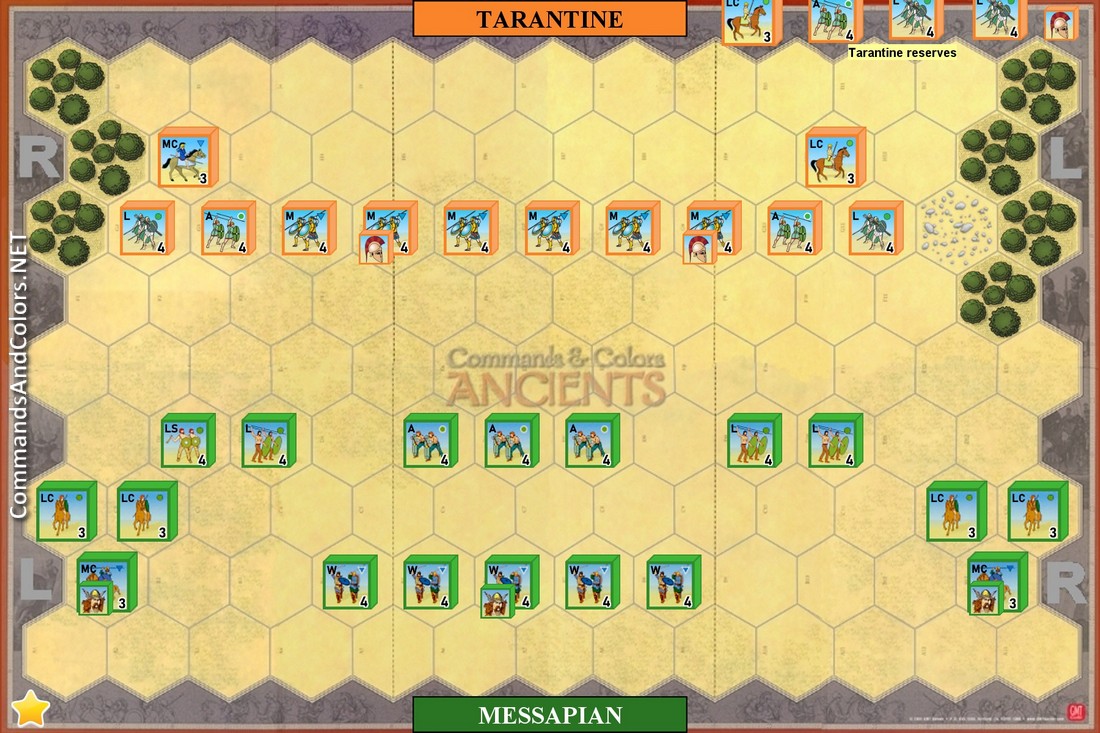 Victory
7* (8) banners
Upon entry of the Tarantine reserve units onto the board, the Tarantine player must now gain an additional victory banner (8) to win the game.

Special Rules
Tarantine reserves: With the battle fought close to the walls of Taras, the Tarantine player has the option of employing a tactical reserve composed of 1 Leader, 2 Aux, 1 Light Inf., and 1 Light Cav.

The Tarantine player may bring in the reserves on any game turn by playing any leadership card, and may enter in any section of the board, (as dictated by said leadership card).

The leader may be placed with any of the four reserve units.

All reserve units must expend one MP to enter the board, then may move normally and may combat on entry turn.