Historical Background
The rivalry between Athens and Sparta, which was often simmering before consuming the last thirty years of the 5th century, was not limited to the Greek mainland.  Across the Ionian Sea in Magna Graecia (southern Italy), two colonies of these bitter adversaries wrestled over control of the resource-rich area known as Siris on the coast of the Gulf of Taranto.  Siris lay in between the Athenian colony of Thurii (founded 443 BCE) and the Spartan colony of Taras (founded in 705 BCE), and the conflict was likely more about expanding their respective local dominions than an extension of the impending Peloponnesian War.
As a newer, less established polis, Thurii actively sought out an alliance with the Messapii, located north of Taras along the Adriatic coast to counter the larger forces that Taras could bring to any battlefield confrontation.  Additionally, the Thurii-Messapii army had a leadership advantage in the form of Cleandridas, an exiled Spartan general who had been banished from the Peloponnese for accepting an Athenian bribe as an advisor of the Spartan king Pleistoanax.
The combined force of Thurians and Messapians met the Tarantines somewhere between the two colonial poleis, likely in the disputed area of Siris.  Details are sketchy, but the sound reasoning of Fred Ray in “Land Battles in 5th Century B.C. Greece” puts the composite force as smaller in hoplite numbers than the Tarantines, but likely with more cavalry and light troops than their opponents.  Although the Tarantines were apparently victorious, the two rivals ultimately agreed to repopulate Siris together as a “communal colony”, which suggests it was not exactly a crushing defeat for Thurii.
The stage is set. The battle lines are drawn and you are in command. Can you change history? 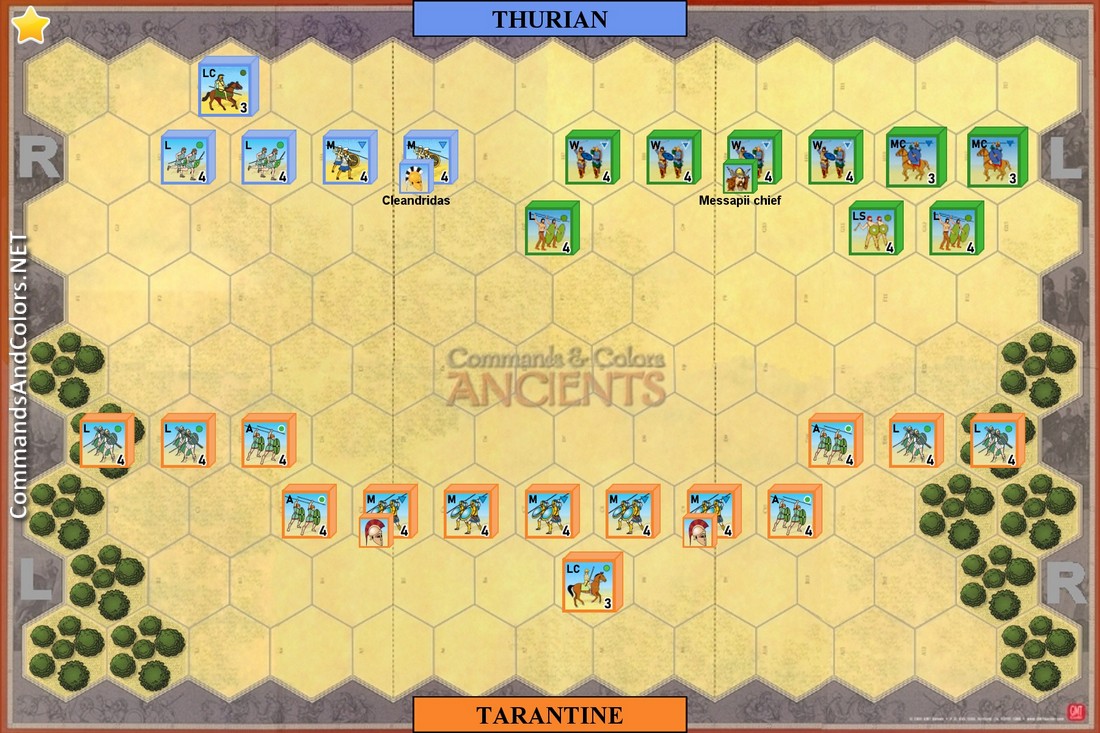 Special Rules
As this partnership between Thurii and Messapia was only recent joined, a leadership command card may not command both Thurian and Messapian units simultaneously.  There are no other card restrictions (line command, double time, etc.).