Historical Background
Responding to barbarian incursions into Roman-controlled Gaul, the deputy emperor Julian led a classically varied and specialized Late Roman army to face off against a Germanic Alemanni confederation, led by their charismatic king Chnodomar.  Although outnumbered by at least 2:1, Julian confidently led his army, with its impressive cavalry component including the vaunted cataphractrii, to counter the Alemanni forces crossing the Rhine near modern-day Strasbourg, France.  The Alemanni recently had success against other Roman armies, and boldly crossed the river and assembled on the Roman side of the Rhine, challenging Julian’s force in the open field.
Chnodomar formed his troops along the Roman highway to Argentoratum, on a slight rise between a swampy riverbed and fields of ripened wheat, and planned ambushes on both flanks.  On the Alemanni right, Chnodomar posted warriors hidden in the marsh poised to surprise the Roman left flank, while on the Alemanni left, he personally led the German cavalry along with skirmishers hidden in the tall wheat to bring down the cataphracts, who he knew outmatched his own cavalry.  In the center, Chnodomar posted his warrior infantry, anchored by noble-led “regales” that formed the elite of his assembled army.  After pleading with his subordinates to exercise caution and follow the prescribed Roman method of building a fortified camp after their long march to the battlefield, Julian relented and assembled his army for battle.
Julian positioned his cavalry on the Roman right to counter the Alemanni cavalry, and drew his legions up in the center, with auxilia units on the ends, as well as an additional force under the battle-hardened Severus on the left wing opposite the marshy, broken ground.  Julian also posted reserves behind his main line, and was himself positioned with a picked cavalry escort, ready to respond where needed once the battle began.
Unfortunately for the Romans, the cataphracts, a dominant force on battlefields of the period, were shattered in the opening phases of the battle, as Chnodomar’s plan worked to perfection.  The cataphracts, losing their leader and routed by the combined attacks in the wheat field, crashed into the right side of the Roman infantry; it is a testament to the steadfastness of those units that this did not cause a total collapse of the Roman right.
Emboldened by the success of Chnodomar’s stratagem, the Alemanni surged forward in a classic Germanic warrior charge aimed at driving a wedge through the Roman lines.  Despite some initial success, which included a penetration of the Roman front, the Alemanni warriors were soon outmatched by the Roman legions.  Severus exercised caution on the left, careful not to either overextend the line or fall prey to the forces assembled in the marshes.  Julian committed his reserve, which after a hard-fought struggle shored up the breach, and turned the battle into a rout, carrying to the banks of the Rhine.  The real slaughter then began in earnest, with the river soon “foaming with the savages’ blood” according to the Roman historian Ammianus.
Some 6,000 Alemanni had fallen on the battlefield, with perhaps thousands more killed or drowned in the Rhine, compared with only 243 Romans.  Julian had effectively pacified the northern frontier, and later engaged in campaigning across the Rhine before becoming emperor in 361.
The stage is set. The battle lines are drawn and you are in command. Can you change history? 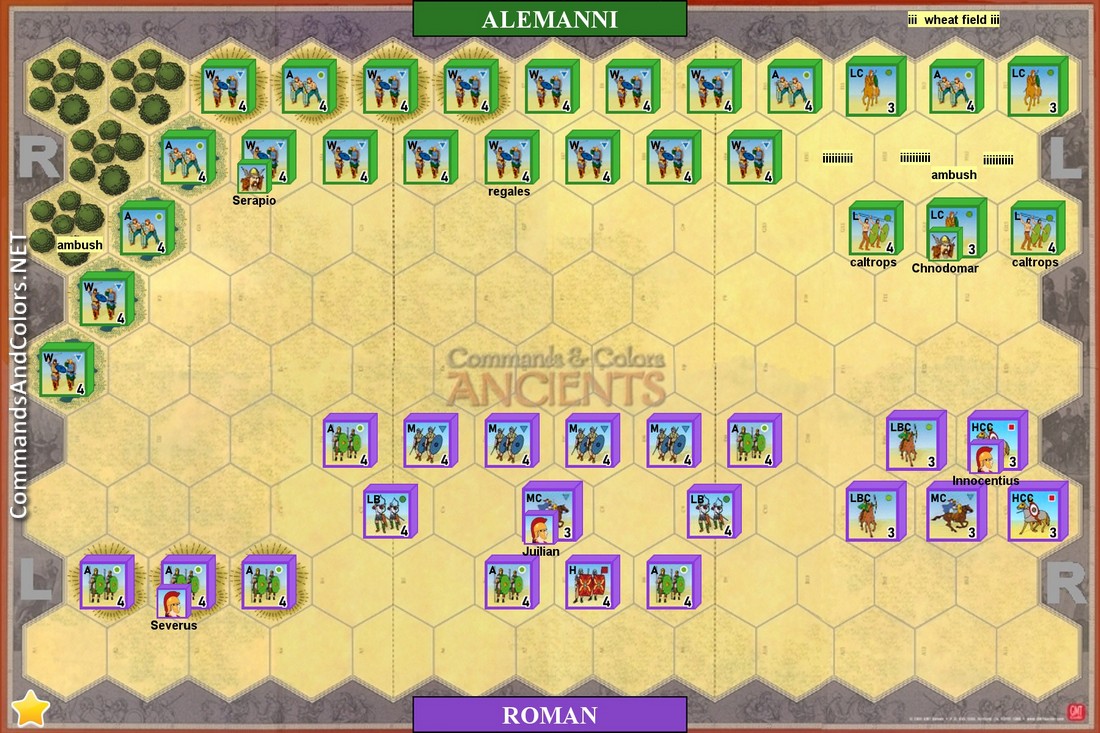 2a. they are “hidden”, and may not be in range-attacked until they either move, fire, or are “discovered” by a Roman unit moving into or through an adjacent hex.
This applies to both units individually, meaning they must be discovered separately.

2b. while in “wheat” hexes (9 corner hexes) only, the caltrops rule is in effect for these two units, reflecting the pre-arranged Alemanni stratagem of hiding light infantry interspersed amongst their cavalry, which they knew could not compete with the armored Roman cavalry.

2c. wheat hexes do NOT block line of sight

3. Right Flank Ambush: though Severus avoided the ambush, it is recorded that these Alemanni troops were prepared to “rise up suddenly and throw everything into confusion”; therefore, the four units located in the marsh hexes also have two special rules:

3a. they are “hidden”, and may not be range-attacked until they move, fire, or are “discovered” by a Roman unit moving into or through an adjacent hex.

3b. however, unlike the left flank, this “ambuscade” was historically unsuccessful, so therefore as soon as one unit is “discovered” in a marsh hex, ALL four units in marsh hexes are simultaneously “revealed”.

4. Alemanni “regales” special unit:  The Alemanni center was led by a collection of regales, or princes, and briefly pierced the center of the Roman line during the climactic charge of the Alemanni infantry.  To reflect the martial prowess of the regales, this unit retains all qualities of a full-strength warrior unit, regardless of block loss, until eliminated.

5. Julian’s Leadership:  To reflect the impact of Julian’s crucial battlefield leadership, the Romans will be reduced from 6 Command Cards

to 5 if Julian is eliminated.

6. The Alemanni player begins the game with the Double Time card in their hand, as one of their four command cards.  This card may be played at any time during the game.