Historical Background
The Roman Empire lacked an accepted institutional system of succession whenever an emperor died. This typically led to multiple claimants to the throne and civil war. So, when the erratic and eccentric emperor Commodus was murdered in 193 AD, it ushered in just such a period, sometimes called the “Year of the Five Emperors.” Pertinax was proclaimed emperor but, after a reign of only 83 days, he was murdered by his own Praetorian guards. The Praetorians auctioned the throne off to a rich senator, Julianius Didianus. Meanwhile three field commanders claimed the throne—Septimus Severus in Pannonia, Pescennius Niger in Syria, and Clodius Albinus in Britain. Septimus Severus reached Rome first with his veteran legions, executed Didianus, and punished the treacherous Prateorian guards. Before marching to face Niger in the east, Severus convinced Albinus that he could be his co-ruler and heir.
Severus met Niger’s forces in Syria, near the River Issus in 194 AD. Having a numerical advantage, Serverus attacked frontally while sending the bulk of his cavalry around a large wood on his left to outflank the enemy’s battle line. The initial frontal assault failed to break Niger’s line but Severus’ cavalry, after overpowering Niger’s cavalry on the left, broke through onto the enemy infantry. Niger’s army was now trapped between Serverus’ two forces and it was destroyed. Niger was killed while attempting to escape to Parthia. Severus would still have to face Albinus to consolidate his rule.
The stage is set. The battle lines are drawn and you are in command. Can you change history? 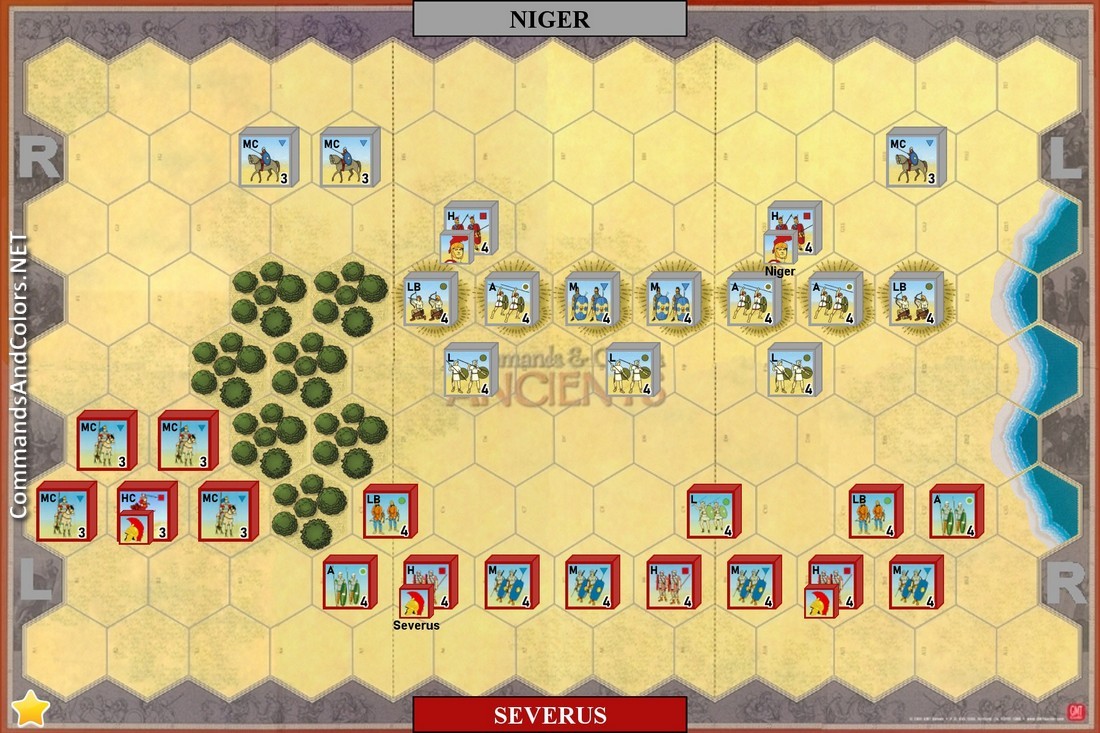