Written by Jim Duncan. Posted in Battles of the Early Roman Republic

Historical Background
Following the Sack of Rome in 387 BC and the subsequent withdrawl of the Gauls, Rome entered into a period of warfare against many of her neighbours. in 383 BC the colony of Velitrae in the Alban hills revolted against Rome supported by troops from Praeneste. The revolting colonists were defeated in 382 BC and Rome then went on to declare war against the Praenestines who then joined forces with Romes long time enemy the Volscians, a tribe of people to the south of Latium.
The Volscians attacked and captured the Roman colony of Satricum and mistreated many of the Romans therein. Rome dispatched a force of 4 legions under the command of the ailing and ageing Camillus, victor of many previous Roman battles. He was asssited by Lucius Furius who was impatient to attack the Volscians who had marched out in front of the Roman camp. The Sick Camillus stayed in camp with a small reserve while Lucius attacked and was initially successful until the Volscian reserve in their hill camp counterattacked and were driving the Romans back.
At this point Camillus rose from his bed, was placed on his horse, and rode out of camp with his small following. He urged his troops to turn and fight and on the sight of their beloved commander the Romans rallied and defeated their enemy. Rousing stuff and typical of the writtings of Livy, but it makes for a good battle.
The stage is set. The battle lines are drawn and you are in command. The rest is history. 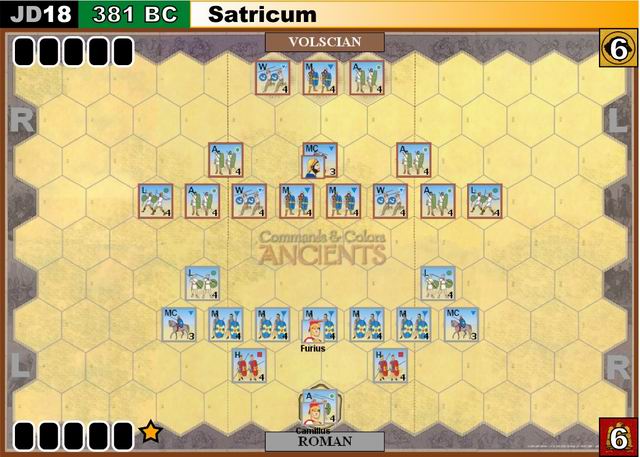 Special Rules
The units in hex A7 may not be ordered until a Roman turn starts with that side trailing by 1 or more victory banners. At the end of the 1st Roman turn in which Camillus has moved that player draws 2 command cards and removes 1 random card from the Volscian player.