Written by GMT Games. Posted in First Peloponnesian War (460-445 BC)

Historical Background
The First Peloponnesian War (460-445 BC) broke out due to Megara’s defection from the Spartan alliance, and Spartan envy and fear over the growth of the Athenian Empire. Nicomedes marched an army into Boeotia in 457 BC to intervene in a dispute between the Dorians and Phocians. He forced the Phocians to accept terms, but while he was in Doris an Athenian Fleet moved into position to block his return across the Corinthian Gulf. Athens, then sent out an army to meet the Spartans, and the two forces meet outside Tanagra. The Athenians brought a large contingent of Hoplites supplemented by a number of allies. The total number given by Thucydides is 14,000 plus a small contingent of Thessalian cavalry. The allied Spartan army consisted of 1,500 Spartans and 10,000 allied soldiers. According to Thucydides, the Thessalian cavalry joined the Spartan side during the battle, and the Spartans and their allies wore down and broke the Athenians. Both armies suffered heavy losses, but the Spartans won the battle and opened the way back home. This was the first major land battle of the war and began a pattern of Spartan dominance on land.
The stage is set. The battle lines are drawn and you are in command. Can you change history? 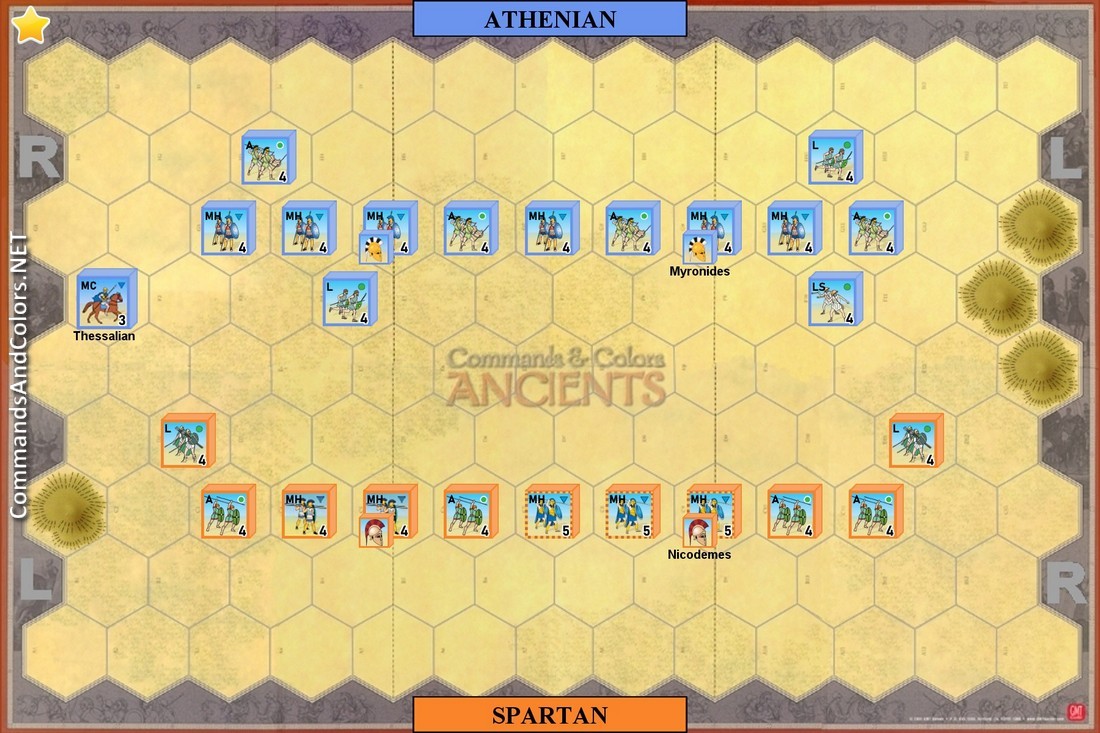 The-Admiral replied the topic: #3368 2 years 1 month ago
With lockdown I have been researching around this battle and the general situation around it. There are numerous papers discussing all differing aspects of the campaign: Why did Sparta take such a large army against tiny Phocis? Were they so stupid as to not realise they could get cut off, and were they really cut off at all? Did their army include any Boeotion troops? Why did they camp at Tanagra? were they supporting Thebes? Did they always intend to fight the Athenians? No certain answers to any of these questions and more, but it was fun reading all the arguments.

Next I looked at the GMT GBoH Hoplite module scenario. Wall to wall MI hoplites whereas in GMT's Ancients version there are more light troops in both armies than hoplites. Weird?

The Historical discussion states that the Spartans won a victory that established their dominance on land for years to come, but it was hardly a victory at all. All they won was the right to bugger off home. The Athenians suffered no loss other than some face, and it could be argued that not getting stuffed by the Spartans was a moral victory. In fact after the Spartans had gone, and 62 days after the battle, Athens sent another army north and won a crushing victory against the Boeotians at Oenophyta not far from Tanagra, and this victory did establish Athenian dominance over Boeotia (Athenian land Empire) for the next 10 years.
GF1954 replied the topic: #3188 2 years 5 months ago
2 solitaire games, with both sides winning 6 - 5. Fairly even contest.
Read More...