Written by alecrespi. Posted in Second Mithridatic War (83-82 BC)

Historical Background
Following the massive defeats of the Pontic army in Greece, Mithridates was forced to make peace with the Romans. Sulla was also eager for a settlement as he had to return to Italy to reinstate his authority over the Senate. The Peace of Dardanus meant Mithridates had to hand back his conquests in Asia Minor and Greece, but it was never actually ratified in writing. The Roman commander left in Asia Minor by Sulla, Lucius Licinius Murena, used this loophole, along with Mithridates' reticence to vacate parts of Cappadochia, to justify raids into Pontus. Pontic protests to Sulla had no effect and merely resulted in a full blown invasion by Murena towards Sinope along the Halys River valley.
"Murena may have believed that he was following in the footsteps of Sulla, but in taking on Mithridates with an army composed mainly of Bithynian, Galatian and Cappadocian levies he was closer to the unfortunate Manius Aquillius (See Battle of Protopachium). Murena in his turn was to discover how dangerous the Pontic army was when campaigning on home ground. His army was shadowed from across the river by Mithridates' general Gordius, and it soon became apparent that Gordius was keeping in touch with the Romans until Mithridates could arrive with the main Pontic army. When Mithridates did arrive, his men promptly crossed the river and soundly thrashed the Roman force. A startled Murena retreated to a strong position on a nearby hill, but before he could dig in the Pontics swept over this too. There was nothing for it but for the remnants of the Roman Expeditionary force to fall back through the trackless mountains of Phrygia, harassed all the way by Pontic skirmishers."
Sulla recalled his man to Rome and the 2nd Mithridatic war was over.
(Quote taken from the book "Mithridates the Great" by Philip Matyszak. My comment in brackets.)
The stage is set. The battle lines are drawn and you are in command. Can you change history? 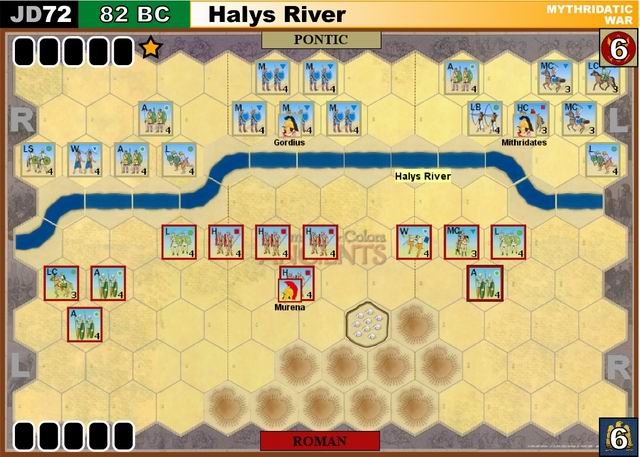 Marius Legions Rules are in effect.