Heraclea: 280BC (The Main Battle)
Pyrrhus Against Rome I

Historical Background:
“While his colleague…, was engaged in Etruria, the consul Publius Laevinus had in the Spring of 280BC again invaded Lucania with the usual consular army of twenty thousand men, and devastated it. Pyrrhus advanced to meet him. On the rolling plain between Heraclea and Pandosia, on the Siris, the Roman Legion first measured its strength against the Grecian Phalanx. Pyrrhus had the slightly superior force. “
“When the king came in sight of the Roman camp, and from across the Siris observed its orderliness…he could not conceal his surprise. He saw that they were not barbarians but a disciplined army to fight, one indeed whose organization was superior to his own. Nor was his surprise quickly lessened; for no sooner did the Romans perceive the approach of the enemy than they filed from their camp with their usual promptness and perfect order, pushed some light troops, sustained by a column of horse through the river ford, smartly attacked the van of Pyrrhus’ army, which was holding the ford, and drove it in on the main body. Startled at this audacious advance and sudden check, Pyrrhus galloped to the front with his three thousand cavalry, and although thrown from his horse, at which for a moment his army was somewhat abashed, soon reestablished the matter along his own front. The Roman van held the fords and enabled the legions to cross, when they deployed into line….”
“The two lines of heavy foot met; the ponderous Phalanx struck its fearful blow, but failed to pierce the legion; it met a foe as it had never encountered. In vain did the sarissa of the Epirots force back the Roman line; as often did the legionaries arrest its onset with their own fierce charge and greater front. The fall, in the fray of Megacles, one of Pyrrhus’ general officers, with whom the king is stated by Plutarch to have exchanged armor-for what purpose is not clear-for the second time threatened the destruction of the phalanx from sheer demoralization at the supposed death of its leader, while the Romans were correspondingly cheered, and Laevinus felt sure of victory; but Pyrrhus, with bared face, rode through the ranks, and to see him revived their courage. The phalanx recovered and once more moved to the attack. The lines clashed again and again. Seven times the Roman charge broke on the phalangial masses…The one could not break the other, nor could this tear its foe asunder…”
“Finally Pyrrhus, unable to make headway, brought to the front his elephants, until now held in reserve. The Roman horse was at this time, seriously, and as Laevinus imagined successfully, threatening Pyrrhus’ flank. Appalled by the aspect of these huge creatures, which none had yet beheld, and which now suddenly appeared behind a roll of ground…the horse fell back in confusion and broke through the line of the legion in its panic. Pyrrhus launched his Thessalian cavalry upon the cohorts, which completed the defeat. The Roman forces fled across the river, but managed to hold the fords against the king’s pursuit, According to Dionysius fifteen thousand Roman legionaries lay dead or wounded upon the field; Hieronymus says seven thousand; two thousand were captured.
Pyrrhus had suffered equally. Dionysius gives thirteen thousand as his casualties; Hieronymus only four thousand killed. But the smaller figure was a terrible loss….Pyrrhus visited the field thus won. He saw that all the dead Romans lay with faces to the foe. “One more such victory and I am lost” quoth he, according to Roman legend.”
(The above was from T.A. Dodge’s 1891 masterwork Hannibal p.110-113) 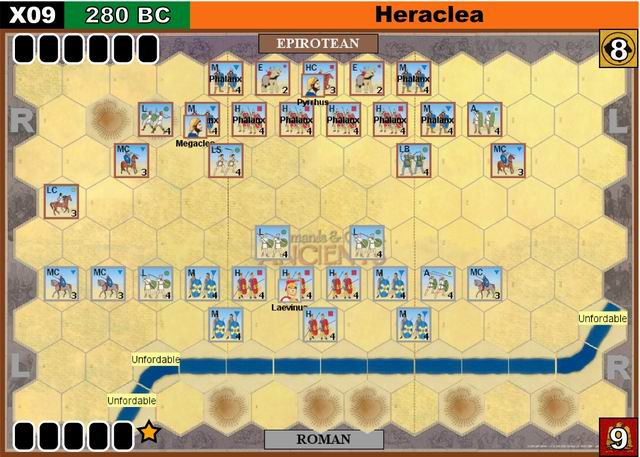 Victory:
The Romans must reach 9 Banners to win, the Epirots 8 Banners. If the Epirots reach 8 Banners at any time play through the next complete Roman Player-turn—if the Romans reach 9 Banners during their next Player-turn the result is an historical “Pyrrhric Victory” otherwise the game ends in a Epirot Victory. The Romans get 2 Banners (instead of 1) if Pyrrhus is eliminated (but initially it is not know which Epirot Leader is Pyrrhus, see
special rules below on the armor switch).

1) All Epirot Medium and Heavy Infantry are considered to be Phalanx Infantry. Phalanx Infantry operates under a set of special rules as follows in a) through e) below.
a) Clear Terrain Combat Bonus: When involved in Close Combat with an enemy Infantry unit, a Phalanx Infantry that still has three or four blocks on map receives an extra (+1) dice if both of the involved opposing units are in clear hex with no terrain tile present. This is both for any initial Close Combat Attack, and also when Battling Back (but see exception in d) below). The bonus does not apply to any Momentum Combat.
b) Phalanx Infantry cannot utilize “double time” Movement or Order activation per the Double Time card. Phalanx Infantry may not be ordered at all by play of a Double Time Card.
c) Phalanx Infantry may not engage in Close Combat if they have just moved before combat their maximum of one hex, unless the move was into one of the two hexes toward their “front” (i.e.: “front” as in towards the initial setup position of the opposing army) of the moving Phalanx Infantry unit, and that moving Phalanx unit than proceeds to engage in close combat with an enemy unit in one of its “front” two hexes in the new hex it moved to. Phalanx Infantry may engage in normal Momentum Movement and Momentum Combat regardless of the direction of the combat—although without the Phalanx Clear terrain Combat bonus if involved in Momentum Combat (see a) above). Note: Non-moving Ordered Phalanx units may always engage in Close Combat.
d) Phalanx infantry units that “Battle Back” at enemy units located in hexes other than the “front hexes” roll a maximum of three dice (and even this could be reduced further by terrain factors).
e) Phalanx Infantry units located in clear terrain that also still have three or four blocks on map at the start of the close-combat or battle back ignore the first sword hit inflicted on them by an enemy unit attacking or battling back from a “front” hex. This advantage is also granted in any Momentum Combat.
Example of “Front” hexes: A Phalanx Infantry unit in hex H7 would have the following two hexes adjacent: G8 & G7 as its “front” hexes.

2) Leader Special Rules:
A Leader attached (stacked with) a friendly unit may cancel one sword hit on the unit in lieu of canceling a retreat hit.
A unit involved in close combat with the support of a Leader may only count one helmet hit amongst those rolled to inflict a hit on an opposing unit.

3) Epirotean Elephant Reserve Special Rules & Shock effect
Once per game the Epirot side can declare before playing their card for their player-turn a special “Elephant Reserve Move”…The Epirot Player may immediately move any of his elephant units not adjacent to the enemy up to 4 hexes as if the elephants were making a normal move, however this move may not enter hexes adjacent to enemy units. After the “Elephant Reserve Move” he plays his card normally and may even have the elephants move again and have combat—being ordered via the card. The Elephant Reserve Move may not be executed during the first three Epirot turns of the game.
Since this was the first time in history the Romans ever faced elephants, each Epirot elephant unit while at full strength (two blocks) gets a +1 dice bonus throughout the battle when in close combat or battle back.

4) Megacles and Pyrrhus and the Armor Switch
Before the battle an annalist tells us, for some now obscure reason we are told that Pyrrhus switched armor with his favorite general Megacles. When Megacles was struck down a brief panic ensued in the ranks of the Epirot Army until the king showed his face among the ranks of the phalanx.
General Rule: When the first Epirot Leader is eliminated in combat roll one die: on a Swords or Helmet result—Pyrrhus has been eliminated (probably killed or sorely wounded) any other result means that Megacles gets the chop. If Pyrrhus is eliminated the Roman Player may select three Epirot Phalanx units to each lose one block immediately—Phalanx units may not be eliminated by this subtraction.