Historical Background
Following the catastrophic Roman defeat at Tribola in 147 BC the surviving 6,000 Romans fled to the southern Iberian coastal city of Carpessus.
"The soldiers, who made their escape to Carpessus, were stationed on the walls of the town by the quaestor who accompanied Vetilius, badly demoralized. Having asked and obtained 5,000 allies from the Belli and Titthi, he sent them against Viriathus who slew them all, so that there was not one left to tell the tale. After that the quaestor remained quietly in the town waiting for help from Rome.
Viriathus overran the fruitful country of Carpetania without hindrance, and ravaged it until Gaius Plautius came from Rome bringing 10,000 foot and 1300 horse. Then Viriathus again feigned flight and Plautius sent 4,000 men to pursue him but Viriathus turned upon them and killed all except a few. Then he crossed the river Tagus and encamped on a mountain covered with olive trees, called Venus' mountain. There Plautius overtook him, and eager to retrieve his misfortune, joined battle with him, but was defeated with great slaughter, and fled in disorder to the towns, and went into winter quarters in midsummer not daring to show himself anywhere. Accordingly, Viriathus overran the whole country without check and required the owners of the growing crops to pay him the value thereof, or if they would not, he destroyed them."
The quote is from "The Syrian Wars" by Appian.
The stage is set. The battle lines are drawn and you are in command. Can you change history? 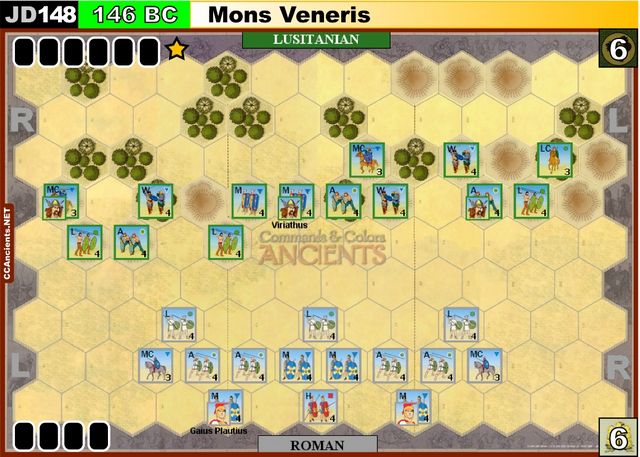