Less More
4 months 2 weeks ago #3463 by Mark-McG
C&C Ancients Naval Variant was created by Mark-McG
So I have been fiddling about with this variant for a number of years, and these latest times means I have managed to get a few solo test plays done to check the concepts and build a few scenarios. So I think it is ready for review.

The most significant changes are
- combat during movement. Much of the attacking happens as ships move, specifically ramming and diekplus attacks.
- ranged attacks are pretty limited
- melee attacks are the boarding actions, which become increasingly important over the period
- limiting the Command Card deck to keep play moving, especially with the lighter fleets of the Hellenic Period

Light Ships (LS) - Triremes, biremes, pentakonters, liburnians, hemiola and tremiola. Fast, but lacking in marines and artillery. 4 blocks with a Green circle, 2 attack dice and move 4. May Evade, No Swords, May Advance and Battle. Retreat 2

Medium Ships (MS) - Quadremes and Quinquremes. Not as fast, more marines but no significant artillery. 4 blocks with a Blue triangle, 3 attack dice and move 3. May Evade Heavy Ship, Swords hits in Close Combat, May Advance, No Battle. Retreat 1

Super Heavy Ships (SHS) – Larger polyremes used to mount siege towers, and siege artillery, 2 blocks with a Red Square with White Border. 4 attack dice and move 1. 3 dice missile fire. No Evade. Swords hit in Close Combat, No Advance after Battle, retreat 1. Ignore 1 Sword in Battle. Ramming hits must be re-rolled with only Red results in the re-roll causing a loss.

Transports (TR) – larger transport vessels. 1 block. Move 1 and no Battle. No Evade. Treat as Red for ramming and battle. Swords hit in Close Combat, No Advance after Battle, retreat 1.

I have deliberately ignored archers, since they aren't ship killers.

Movement Special Attacks
Ram
Attack made during movement with no fightback. Ship unit must not start adjacent to an enemy and must move adjacent and expend 1MP additional to ram. Move ends immediately after attack.
Lighter enemy ships may immediately evade, in which case the ramming ship enters the vacated hex and stops.

Pass Through (Diekplus)
Attack made during movement with no fightback. Ship unit must not start adjacent to an enemy and must expend 1MP to enter enemy hex and 1 MP to exit enemy hex into a vacant hex directly opposite entry hex. Diekplus cannot be evaded.
Move may continue including ram attack if sufficient MP (Anastrophe)

Roll 1 die per 2 blocks. Hit on your color.
Ignore all Swords, Leaders and Flag results

Melee combat.
As normal, hits on your target color. Flags cause retreat of units that cannot ignore a flag (Exception: Retreats are hits if attacker is Corvus armed)

Corvus
Corvus armed ships melee attack normally, but the opponent cannot retreat, and any flags that cannot be ignored are treated as hits as if the retreat path was blocked
When an enemy ship starts adjacent to a Corvus armed ship, once ordered, it must free itself to move. Roll 1d for each unit attempting to move, with any colour result (Green, Blue or Red) allowing the ship to move normally. A Leader result allows the ship to move normally if a Leader is attached.
Otherwise Swords, Flags and Leader results cancel the movement of the ship, but the ship may still battle

Fire Attacks
Fire armed ships have a missile attack range of 2, and roll 2 dice. Target colour hits, and Swords also hit. For each Sword result, roll an extra die, applying further hits and extra rolls from that roll until the attack is completed.

Less More
4 months 2 weeks ago #3464 by Mark-McG
Replied by Mark-McG on topic C&C Ancients Naval Variant
ARGINUSAE (406 BC)
The naval Battle of Arginusae took place in 406 BC during the Peloponnesian War near the city of Canae in the Arginusae islands, east of the island of Lesbos. In the battle, an Athenian fleet commanded by eight strategoi defeated a Spartan fleet under Callicratidas. The battle was precipitated by a Spartan victory which led to the Athenian fleet under Conon being blockaded at Mytilene; to relieve Conon, the Athenians assembled a scratch force composed largely of newly constructed ships manned by inexperienced crews. This inexperienced fleet was thus tactically inferior to the Spartans, but its commanders were able to circumvent this problem by employing new and unorthodox tactics, which allowed the Athenians to secure a dramatic and unexpected victory. Slaves and metics who participated in the battle were granted Athenian citizenship.

The news of the victory itself was met with jubilation at Athens. Their joy was tempered, however, by the aftermath of the battle, in which a storm prevented the ships assigned to rescue the survivors of the 25 disabled or sunken Athenian triremes from performing their duties, and a great number of sailors drowned. A fury erupted at Athens when the public learned of this, and after a bitter struggle in the assembly six of the eight generals who had commanded the fleet were tried as a group and executed.

Design notes: This is a scenario testing the Peloponnesian War period when Triremes were the heaviest ships, and ramming and manoeuvre were the key elements of naval warfare. It also tests the way islands work, especially the way the Athenians incorporated them into their double line, which was a key innovation in fleet formation.
"I will either find a way, or make one."
attrib to Hannibal Barca

Less More
4 months 2 weeks ago - 4 months 2 weeks ago #3465 by Mark-McG
Replied by Mark-McG on topic C&C Ancients Naval Variant
ECNOMUS (256BC)
The Roman fleet of 330 warships plus an unknown number of transports had sailed from Ostia, the port of Rome, and had embarked approximately 26,000 picked legionaries shortly before the battle. They planned to cross to Africa and invade the Carthaginian homeland, in what is now Tunisia. The Carthaginians were aware of the Romans' intentions and mustered all available warships, 350, off the south coast of Sicily to intercept them. With a combined total of about 680 warships carrying up to 290,000 crew and marines, the battle was possibly the largest naval battle in history by the number of combatants involved.

When they met, the Carthaginians took the initiative and the battle devolved into three separate conflicts, where they hoped that their superior ship handling skills would tell. After a prolonged and confused day of fighting the Carthaginians were decisively defeated, losing 30 ships sunk and 64 captured to Roman losses of 24 ships sunk.

Special Rules
• All Roman MS have Corvus
• Roman Transports are towed. Treat towed transports as attached leaders. A ship towing a transport has 1 less MP, and may not conduct ram moves. A Transport can be ordered separately to detach, at which time it is treated as a separate unit. Transports can never be reattached for towing.

Design Notes: This battle tests two Medium & Light fleets, the Roman Corvus & transport ships, and some towing special rules. In part I think Transport ships should work like Baggage Wagons, but in this battle, the towing of the transports was quite significant. Post test I changed the Banner count to 10.
"I will either find a way, or make one."
attrib to Hannibal Barca
Last edit: 4 months 2 weeks ago by Mark-McG.

Less More
4 months 2 weeks ago #3466 by Mark-McG
Replied by Mark-McG on topic C&C Ancients Naval Variant
ACTIUM (31 BC)
The two fleets met outside the Gulf of Actium (today Preveza) on the morning of 2 September 31 BC. Antony's fleet numbered 500, of which 230 were large war galleys with towers full of armed men. He led these through the straits towards the open sea. Octavian had about 250 warships. His fleet was waiting beyond the straits, led by the experienced admiral Agrippa, commanding from the left wing of the fleet, Lucius Arruntius the centre, and Marcus Lurius the right.

Antony and Gellius Publicola commanded the right wing of the Antonian fleet, while Marcus Octavius and Marcus Insteius commanded the centre, with Cleopatra's squadron positioned behind them. Gaius Sosius launched the initial attack from the left wing of the fleet, while Antony's chief lieutenant Publius Canidius Crassus was in command of the triumvir's land forces.
Before the battle one of Antony's generals, Quintus Dellius, had defected to Octavian, bringing with him Antony's battle plans.

Shortly after midday, Antony was extended his line from the protection of the shore and finally engage the enemy. Seeing this, Octavian's fleet put to sea. Antony had hoped to use his biggest ships to drive back Agrippa's wing on the north end of his line, but Octavian's entire fleet, aware of this strategy, stayed out of range. By about noon the fleets were in formation but Octavian refused to be drawn out, so Antony was forced to attack. The battle raged all afternoon without decisive result.

Cleopatra's fleet, in the rear, retreated to the open sea without engaging. A breeze sprang up in the right direction and the Egyptian ships were soon hurrying out of sight. Antony believing that it was mere panic and all was lost, followed the flying squadron. The contagion spread fast; everywhere sails were seen unfurling and towers and other heavy fighting gear going by the board.

Special Rules
• Antonians gain 1 banner for each leader that exits from the Octavian edge of the map. To exit, the unit must start on the Base line, be ordered and move off.

Design notes: The battle of Actium is the final galley battle of the Classical age, with Pax Romanum over the Inner Sea for centuries to come. Not until the medieval period and the rise of Islam would great galley fleets fight again. This scenario tests the bigger range of fleets, and significantly Heavy ships versus a lighter and more mobile fleet. It is also the scenario I first test some 10 years ago, in a earlier state of the rules, so the one that I have least confidence in.
"I will either find a way, or make one."
attrib to Hannibal Barca

I assume you will be using Vassal module. Do you use standard CCA or some version of it which has ships? 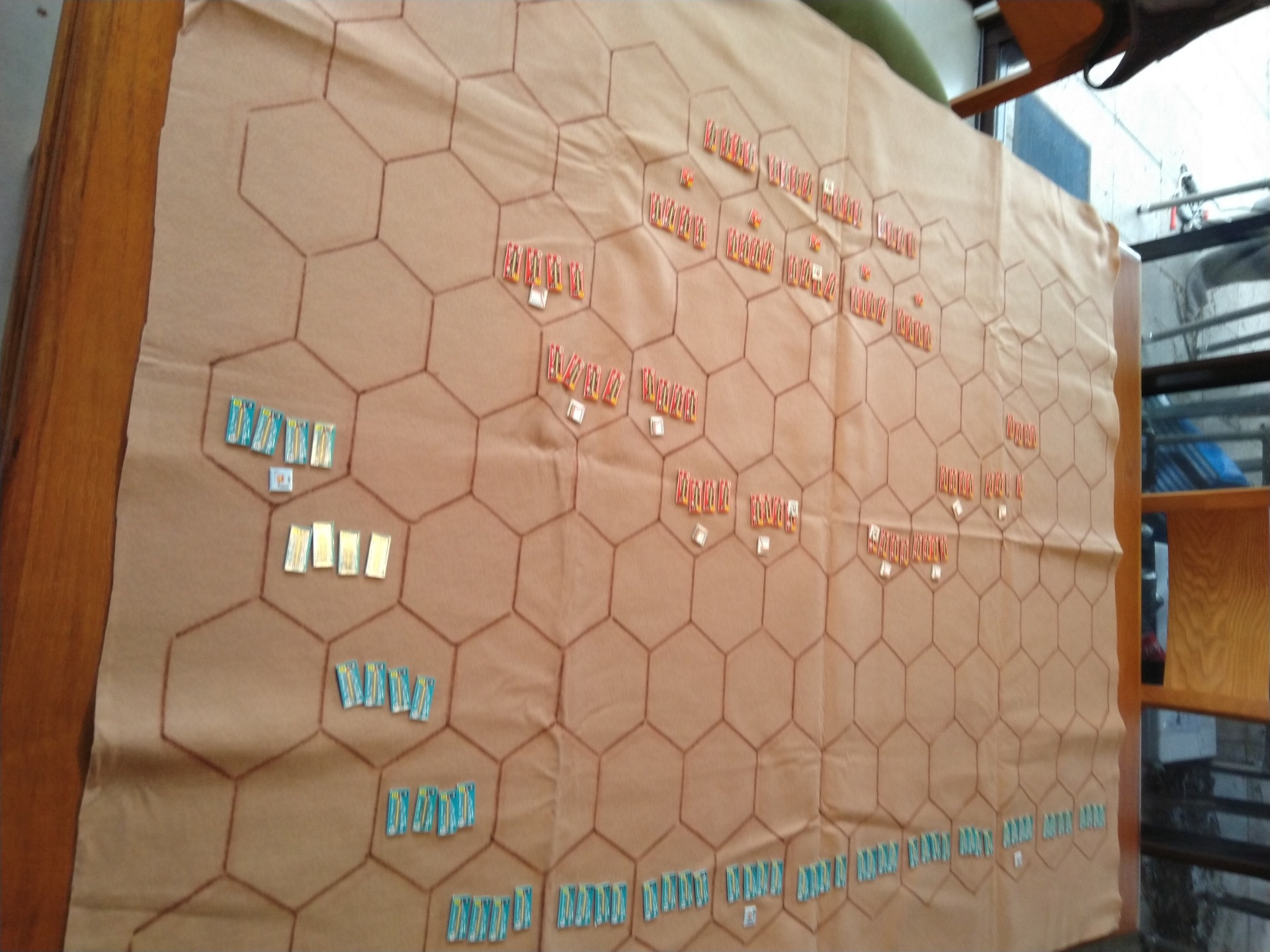 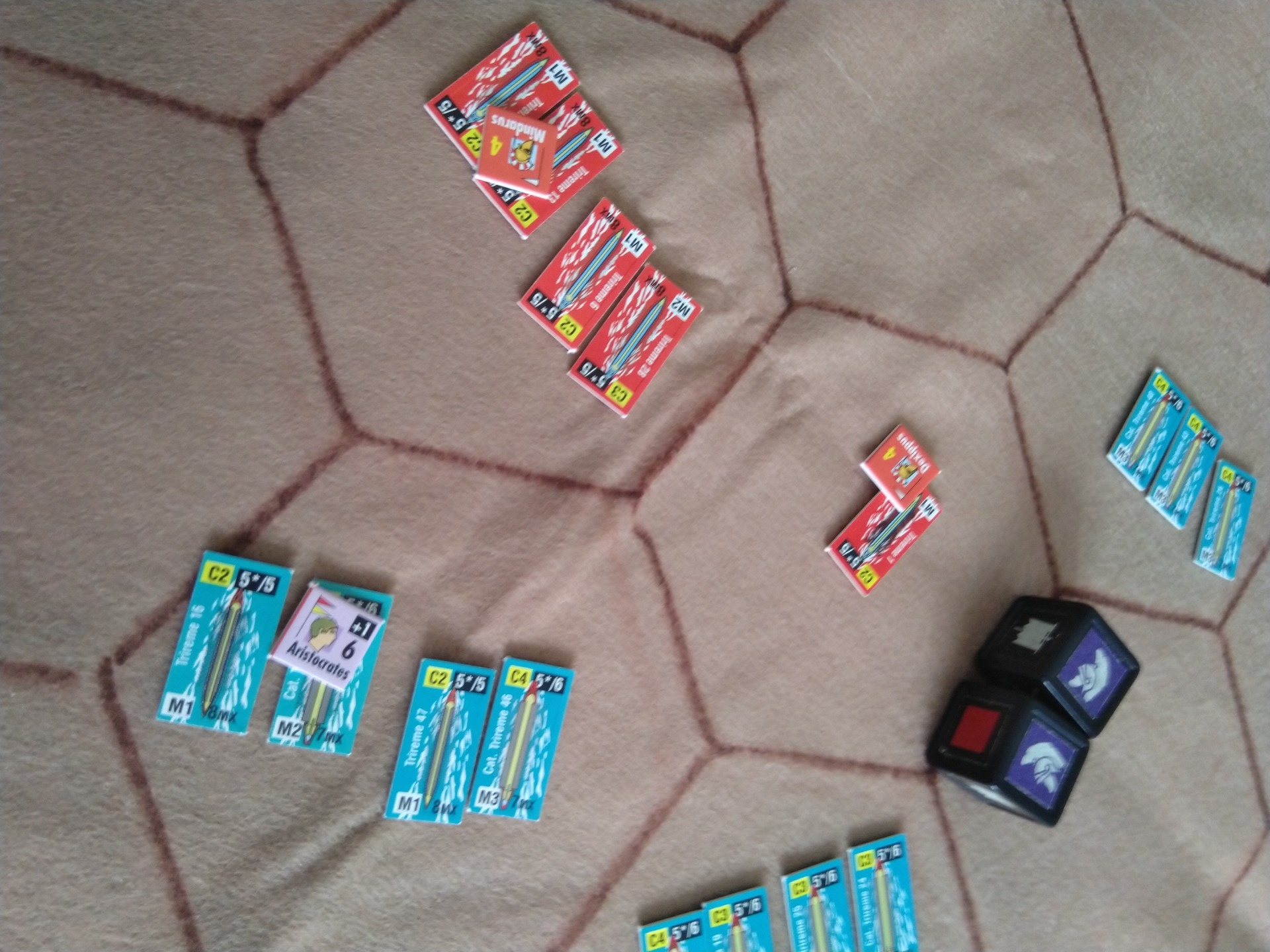 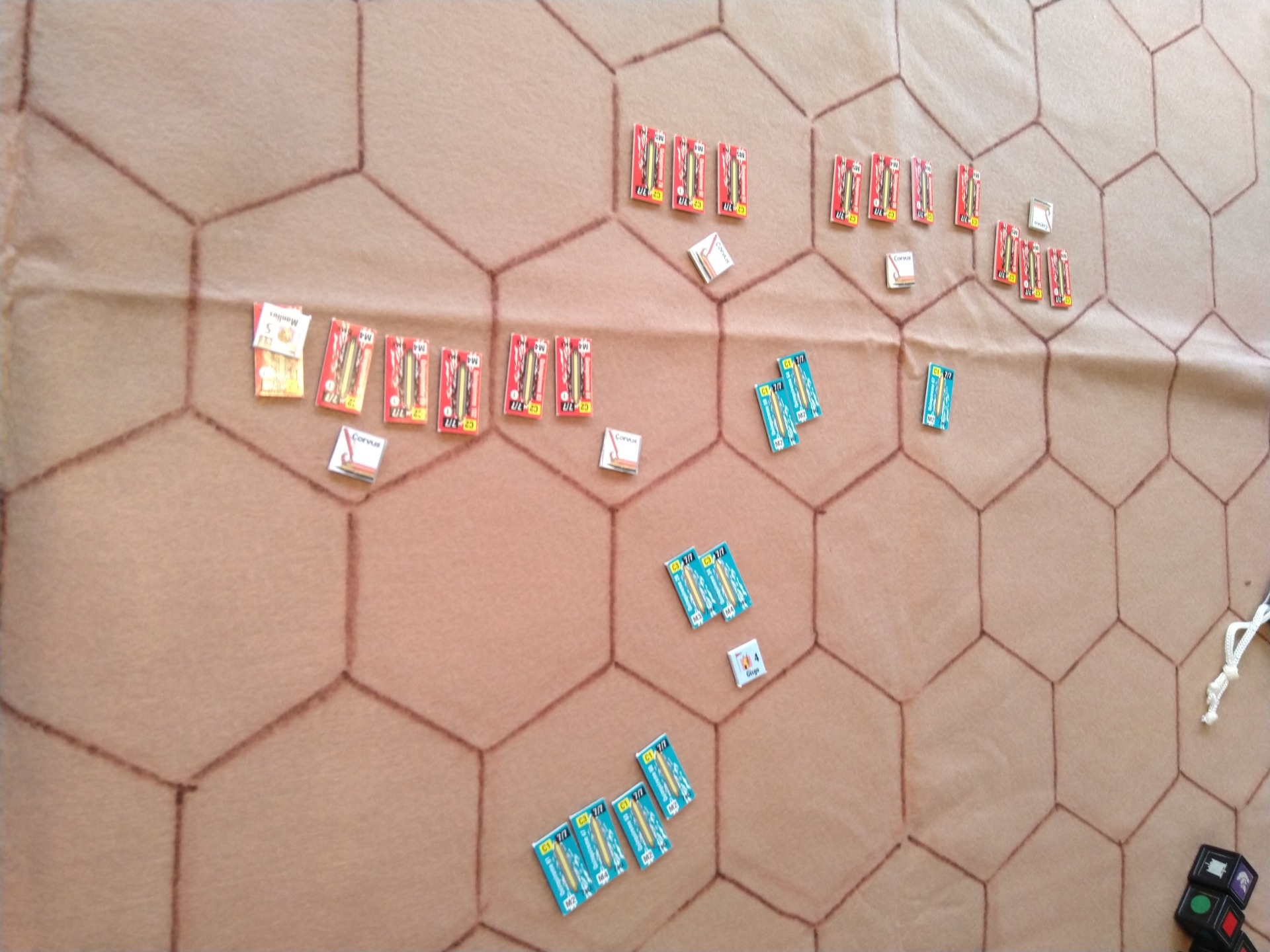 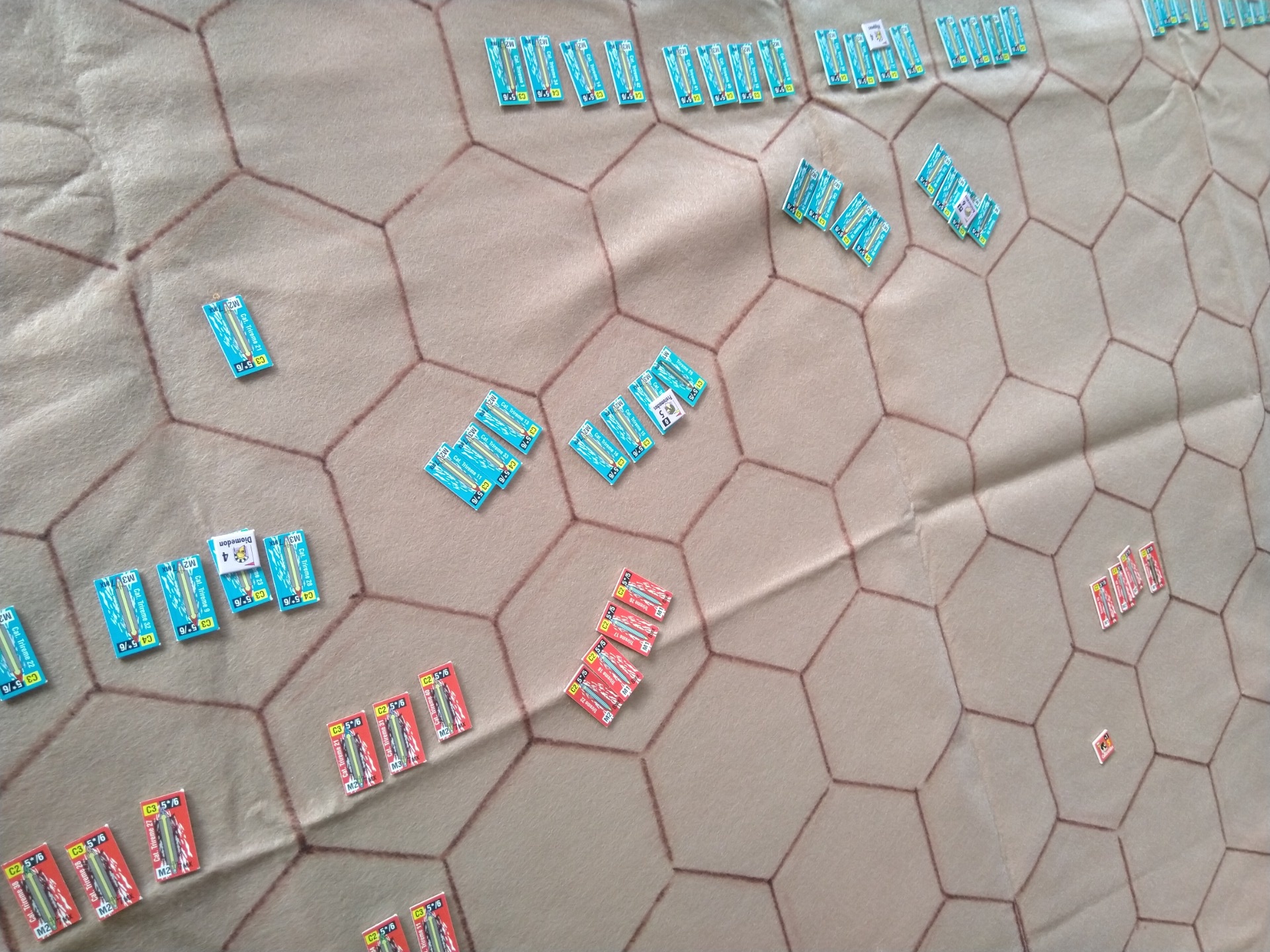 "I will either find a way, or make one."
attrib to Hannibal Barca

Less More
4 months 1 week ago #3478 by mk20336
Replied by mk20336 on topic C&C Ancients Naval Variant
Nice idea!
Should you have it in Vassal I would be glad to give it a try!
theboardgameschronicle.com/